Rubber Soul: Ryan Gosling Falls For a Sex Doll in the Terrifically Quirky “Lars and the Real Girl” 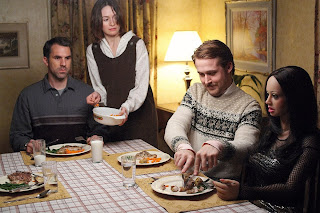 Good actors will make you believe anything. In “Cast Away,” I’m reminded of Tom Hanks’ spellbinding turn as a man stuck on a deserted island who confides in a volleyball for human interaction. ‘Wilson,’ as the ball is eventually dubbed, is everything to Hanks’ character. We believe that the two are conversing and Hanks can stay sane on the island because he now has a companion. Making an audience believe that a socially awkward man could fall in love with a doll made primarily for guys who want to get it on with a mound of rubber is a whole other scenario. And the terrifically fascinating Ryan Gosling is up for the challenge in “Lars and the Real Girl.”

This movie either fails or succeeds on one thing: whether we, as the audience, believe that Lars (Gosling) believes that Bianca (an inanimate, non-living, motionless sex doll) is a real person. And on that fact alone the movie delivers. We empathize with Lars, who really is a more sympathetic Napoleon Dynamite, although we know (as do his family/friends/fellow townsfolk) that Bianca is simply and utterly a life-sized doll. But we gain to respect her as a real person because to Lars in his crazy little mind she is real.

Let’s back up a little. You’re probably reading this and wondering, what on earth are you talking about. Does a character really fall in love with a doll? And a sex toy no less. Yes it’s true. Gosling plays Lars who is a socially challenged individual who lives in the livable garage of his brother Gus (Paul Schneider) and sister-in-law Karin (Emily Mortimer). He can’t really make human connections although Karin tries ad nauseum. They live in a snowy little town where everyone knows each other. Yes, this is that type of quirky independent movie. Before Gus and Karin know it they’re being introduced to Lars’ new girlfriend Bianca, who’s like a lifeless, brunette version of Pamela Anderson, which he ordered from the Internet.

Gus and Karin are appropriately horrified and dumbfounded. And the audience laughs at the absurdity of the situation. They not surprising seek medical attention and the shrink (Patricia Clarkson) suggests going along with it. Lars needs Bianca to work out whatever it is going on inside his head. Pretty soon it’s not just Gus and Karin that are welcoming Bianca but the entire town. You sense the community among the people and how they all come together to make Bianca feel at home. We believe she’s real because everyone else does.

It’s kind of impressive that Lars comes up with a complete backstory for Bianca. She was a missionary, her parents died when she was a child, she’s in a wheelchair. Both Lars and Bianca are religious so he insists that they don’t share sleeping quarters. And everyone else’s reaction to all of this craziness is something that’s key. We, as an audience, most definitely sympathize with his family members, because we can obviously see that Lars has simply gone to a place far removed from any sane person’s mind. We want to reject Bianca as simply a sex doll, which is what she is. However it’s kind of amazing how quickly we come to realize, like everyone else, that she is a fully realized human being to Lars. And that is simply the magic of the movies.

And simply put Ryan Gosling is a testament to amazing acting. He can submerse himself into various roles and completely have you accept him as that character. He can go from skinhead Neo Nazi, to crack addicted teacher, to lonely psychologically damaged goof in a snap. He makes it look too easy with every twitch of the eye and turn of the head. He’s without a doubt one of the great actors of his generation and has a long, rewarding career ahead of him.

And the fact that the film’s ending is so emotional is a testament to writer Nancy Oliver (of Six Feet Under) and director Craig Gillespie controlling the action in such a way that this can work even though it’s really far fetched. We become emotionally attached to Bianca the way Lars is. And it’s not really hard to believe that Lars would become so attached to this doll. Lars really represents all of us, because we’ve all had crazy thoughts at one point or another. And I’d like to point out Kelli Garner, who kind of reminds me of Claire Danes, is perfectly quirky and awkward as Lars’ co-worker who sort of harbors a little crush on the guy.

This movie is so fun, original and quirky, it’s nearly impossible not to fall in love with it. And although the premise might make you think it’s a trashy movie, it simply isn’t. Taken into the hands of John Waters or the Farrelly Brothers this could have easily become something gross, but it’s not. It’s probably the purist movie out there and you can feel the warmhearted family values seeping through the screen. Those who complain that Hollywood doesn’t have an original idea left in its head certainly are up for a treat with this fantastic little movie. GRADE: A