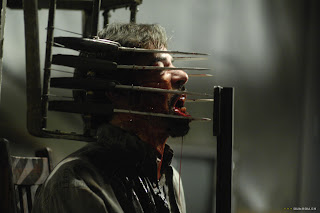 Another year, another Saw. When the third film in this chapter of the bloodily successful horror series was released last year I figured it would be a trilogy. In Part III, they went back to the first film to show us things that we know now that we didn’t know then. It was actually kind of neat, if you will. I enjoy going to see the Saw films, but I always seemed to be slightly disappointed. They films are dark (literally speaking) and the editing is just annoying. It’s as if the filmmakers are actually trying to torture the audience. They might as well hit you over the head with a hammer every 5 seconds. And of course, if William Castle was still around I’m sure he’d find a way to incorporate guaranteed audience thrills with seating wired with electricity to shock viewers in more ways than one. And now we have Saw IV, and with the news that Saw V and VI are already officially in the cards, what we have folks, is the Friday the 13th series of the new millennium.

When it comes to the Saw films only one real thing matters: the death scenes! Who cares about acting and the storyline. Although, I must hand it to the Saw filmmakers because although the main draw is killer (pun intended) torture sequences, there is a story buried in here somewhere. We have Jigsaw (Tobin Bell) who started the whole she-bang 3 years ago. He was dying (I believe of cancer or something related) and since he had nothing better to do he decided to trap people in moralistic death traps that somehow rely on the torture of themselves or another in order to survive. The moral? Be happy to be alive! His victims usually included drug addicts, or people with obsessions like vengeance. Like Jigsaw said in the third film, he’s not a murder.

And poor Donnie Walhberg. Not only does he have to live in the pathetic shadow of his younger brother’s success (check out Mark’s Oscar nom!) but he gets to spend the entire length of Saw IV hanging by his neck, only to have his head crushed by two gigantic blocks of ice. Nice. Too bad director Darren Lynn Bousman can’t make any of his scenes interesting, suspenseful or the least bit scary. And no offense, Mr. Walhberg, but when Mark Walkberg's brother is the biggest star of your film that's kind of pathetic. The Saw movies could seriously use some celebrity boost.

You know what? I really had no idea what was going on in this movie. In fact, this movie kind of reminded me a serialized TV show in which it’s been years between seeing episodes. I felt like they needed a “previously in the Saw saga” recap. The plot basically picks up where Saw III left off, except the mystery of the main character’s missing girl is completely dropped. But perhaps that’s what part V will be about? Who knows. Who cares? This film follows police investigator played by Lyriq Bent (who apparently was in the other Saw movies) who is taught a “lesson” about being obsessed with saving peoples’ lives (is that really so bad?). So Jigsaw, even though he’s really most sincerely dead at the beginning of the movie, sets up a bunch of ridiculous traps for him that involve fantastically gruesome killings. (Tobin Bell is really too good to be trapped in this film frachise, but it's he's most definitely welcome).

We all know the killings are the movie’s real draw here and they are disgusting. My favorite involved a man who had to push his face through knives in order to free himself. And a woman’s scap is pretty much ripped off her head as her ponytail is pulled tighter and tighter. And let’s not forget the guy who has the choice to poke out his own eyes or be ripped apart. Even though I am a fan of gruesome cinematic deaths, I’ll be the first to admit with Saw IV, is enough already! I think it’s time to put the horror torture genre to rest and bring back the scary masked slasher! Hopefully the financial success of the Halloween remake (along with the upcoming Friday the 13th redux) will put slasher movies back on the cinematic map.

As a fan of the horror genre, I’m not ashamed to admit that Saw IV is just really bad. This franchise should have ended with part III. Yeah you have to give credit to the filmmakers for coming up with creative deaths, but the writers have come up with an incoherent story that isn’t the least bit fascinating. GRADE: C-

Hurrah! After all I got a blog from where I can genuinely
take useful facts regarding my study and knowledge.

I get pleasure from, lead to I discovered exactly
what I used to be taking a look for. You've ended
my four day long hunt! God Bless you man. Have a great day.
Bye

Have a look at my weblog :: ครีมหน้าใส

We are a group of volunteers and opening a new scheme in our community.
Your web site offered us with valuable information to work on. You have done an impressive
job and our entire community will be grateful to you.

Hi, i feel that i saw you visited my web site so i came to return the desire?.I'm attempting to find things to enhance my site!I suppose its adequate to make use of a few of your concepts!!


Here is my weblog: visit onlinecasinos.us.org

I like the post format as you create user engagement in the complete article. It seems round up of all published posts. Thanks for gauging the informative posts.