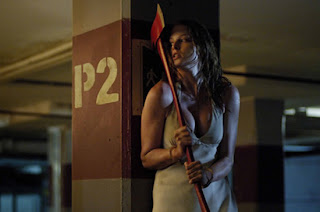 The thriller “P2” does for parking garages what “Psycho” did for showers. How cliché did that just sound? Yeah, a little, but the biggest surprise is that P2, which many will find silly and stupid, is actually quite an efficient and enjoyable suspense film. When you compare it to other crappy so-called thrillers out there P2 actually has plenty to offer. It actually has plenty of elements that I enjoy in these types of films. And in fact I would compare it to the likes of “Misery,” “Red Eye” and “Panic Room.” While those films are all very much superior works of art, “P2”seems to be the neglected stepchild: the one that is just as good but doesn’t the get the respect it deserves.

I liked the small cast: we get two main leads, in fact we really only get two characters. Rachel (Angela Bridges) is working late in her high-rise Manhattan office building on Christmas Eve. She’s really late for her family’s holiday celebration and she’s just had some sort of bad confrontation with a male co-worker. Thomas (Wes Bentley) is the simultaneously helpful and creepy overnight security guard in the building who helps Rachel when she discovers her car won’t start in the underground parking garage. Turns out that creepy trumps helpful because before she knows it, Rachel is chained to a table in Thomas’s office. It seems as though he fancies her and would rather Rachael stay and spend the holidays with him.

I liked the interaction between the leads. Rachel is a good woman in distress. We care for her quickly and she doesn’t do anything too stupid. Bentley (who was also creepy as the bag-loving voeyer in American Beauty) plays up his sinister character with real camp value. He’s obviously insane and he’s not afraid to show it. It doesn’t really seem as though Thomas wants to kill Racheal, he just really has an inappropriate crush on her. He has a surveillance video of her male co-worker getting sexually harassing her and Thomas feels that she is a victim. He just so happens to have this guy tied up on a lower level of the garage. And he proves he’s psychotic by savagely murdering him in front of Rachel. He just sees this as getting vengeance.

Of course since this is a full-length film other stuff has to happen. Therefore, Rachel gets away from Thomas and most of the film is a cat and mouse game of suspenseful scene after another as she attempts to escape from the garage. A scene involving an elevator is equally tense and ridiculous but always enjoyable. I like these types of movies because it all takes place over one night and in one location. With a film like that the director is completely responsible for making it interesting for the audience. Franck Khaloun (who co-wrote the film with his “High Tension” buddies Alexandre Aja and Grégory Levasseur) takes a mundane place where we’ve all been and makes it scary. We’ve all had creepy feelings while walking through a parking garage and this film is the epitome of that fear.

Casual fans of the suspense genre will find something here to enjoy. The film is brisk, scary and intelligent. There are genuine scenes of tension and although there are really two main characters, the filmmakers have surprisingly found ways to put some gore in there as well. The focus here is more on atmosphere than blood and guts but anyone who enjoys a scary ride will want to park it here. GRADE: B

When a individual car or truck is chosen by a person the program will exhibit
which auto sections have presently been marketed relating to the car or truck.

Some of the larger businesses have owner-operators working
for them or have their own tow trucks to make repossessions
easier. Check hydraulic steering fluid and top off as needed.

Thanks for sharing the good and useful information here on the blog for us.
obat aborsi
tanda tanda kehamilan


Thank you for sharing the full text. And allow me to share any posts that contain this health information. I believe this is useful for us. Thank you :)

Thank you for sharing the information, a very interesting article

This article is interesting and useful. And let me share an article about health which insha Allah will be very useful if we use it again for others.