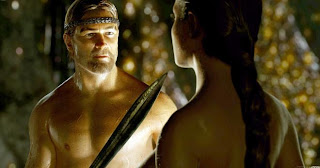 “Just don’t take a course where they make you read Beowulf.” That line of dialogue spoken by Woody Allen in Annie Hall really says it all. The epic poem that has frustrated countless English students is one of the most indecipherable, boring and tedious texts one will ever hope to read. It only makes sense that anyone who would try to adapt it for the big screen would, not only be a completely misguided, but doomed to fail. However, director Robert Zemeckis, using his trusty CGI computer animation motion capture technology and a comprehensible script by Roger Avery and Neil Gaiman, has actually come up with a cinematic adaptation worthy of praise. While it may share characters and plot elements, the motion picture Beowulf is thankfully not nearly as dull as the text it’s based on. (And let’s face it, the original epic poem is so dreadful that even the author doesn’t want to admit he wrote it).

There are really only one or two reasons you want to see this animated epic. First off it is appearing on over 1000 digitally rendered screens in handsome, eye-popping 3D. And then there’s the nudity. Male nudity! Female nudity! Everyone gets a piece. But honestly the main draw here is the visual element. Yes, the film is nice to look at, but that’s not all. The animation really draws you in and the 3D effects help immerse you in the world of Beowulf. It’s really all about the experience. Zemeckis really wants you to get off your butts and go to theater to see this. This isn’t something you should be downloading illegally or buying on DVD from the sketchy guy on the street corner.

I did “read” the original story way back in 8th grade, which not coincidentally is the year I discovered Cliffs Notes. All I remember is it being about a hero who slays the big scary creature. And that’s basically what the movie’s about. Beowulf (voice by Ray Winstone; body by Aaron Stephens who didn’t get final credit for loaning Ray his six pack) is a heroic warrior. He’s practically a Swedish Superman. He can swim very far and slay monstrous sea creatures. He barely seems human though he is. He is enlisted by the drunken King Hrothgar (Anthony Hopkins) to slay the monster Grendel (Crispin Glover) who happens to be terrorizing his kingdom’s habitants.

Beowulf agrees to find this creature and so he strips down ready to face the beast on the same playing field with no weapons. This leads to an exciting nude fight between our hero (whose un-PG-13 friendly naughty bits are obscured Austin Powers-style) and Grendel. After defeating the beast, Beowulf sets out to even the score with Grendel’s even more evil mother (voice and nudity by Angelina Jolie). Grendel’s mother isn’t your typical monster. She changes form and uses her slinky tail and naked booty to seduce our hero. She seductively rubs his sword and it melts (paging Dr. Freud) and he promises not to kill her. And then he goes back to the village, pretends that he killed her, and then Hrothgar throws himself off his castle and Beowulf becomes the new king, only to realize that being king comes with a price…

I’m sure English teachers will be scratching their heads and ranting at the screen but you know what? This is Beowulf for people who didn’t like to read Beowulf. Therefore making movie vs. text references is kind of inapplicable. Anyone hoping that they could catch the flick instead of reading those confusing words will enjoy this fun and impressive movie from start to finish. And like I said, there’s naked people in it. Take that, stuffy lit professors! And although the film has a PG-13 rating, it tends to be surprisingly intense with creative use of violent images. I guess you can get away with a lot more when a movie is “animated.”

Beowulf is a technical achievement and it is a wonder to behold and it’s certainly more entertaining than last year’s epic snooze-fest “300.” It has some great voice work and the animation is impressive. Most of the fun is due to the 3D, so I guess the gimmick worked on me. It’s fun and briskly paced. If you’re looking for an entertaining time at the movies (or fleeting rear nudity) you need look no further than Beowulf. GRADE: B+

Wow that was odd. I just wrote an very long comment but after I clicked
submit my comment didn't appear. Grrrr... well I'm not writing all that over again. Anyhow, just wanted to say fantastic blog!