The Racketeer: Denzel Washington is an “American Gangster” 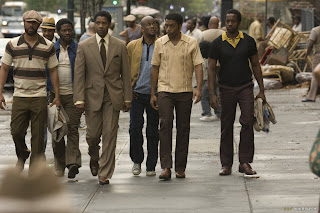 Many consider “The Godfather” one of the best movies of all time. I enjoy it, but unlike most people it’s far from being one of my favorite movies ever. Therefore you can’t really blame me for finding “American Gangster” less than amazing. It has plenty of good things about it, but as entertainment I’d rather see something else. The acting is good, the directing is good and the story is good. Many will love it, but I just liked it. I make the direct comparison to The Godfather, because it seems to be most like it. I wants to be as good, but it really just succeeds as being a gritty, 70s era drug and mob fest.

Director Ridley Scott has about as varied a career as you can possible imagine. He’s directed science fiction, romantic comedy and period epics. Although he’s never one an Academy Award, “American Gangster” might help him out just a bit. And I can honestly say that after seeing American Gangster it really feels like a film that seems guaranteed to be nominated for Best Picture next spring. I’m not saying that it doesn’t deserve awards attention, but there are so many more astounding films out there that probably won’t get the awards chance. Scott’s work here is very good, but he honestly doesn’t do anything that he hasn’t done before. If you ask me, he should have won years ago for “Thelma & Louise,” heck even “Alien.”

“American Gangster” follows the true story of Frank Lucas (Denzel Washington, another likely nominee) who became the one of the most prominent Black “gangsters” back in 1970s Harlem. He actually had drugs importing into the country using dead American soldiers’ coffins coming back from Vietnam. He was able to rise up and no one could really stop him, until we’re introduced to Russell Crowe’s detective character Richie Roberts The film sort of cross cuts between Frank and Riche until finally Richie begins investigating Frank. And Frank is so powerful that he can shoot a man in the head on the street and no one can seem to touch him.

Where the film succeeds the most is in its feel. It really feels as though it came from the 1970s New American Wave of gritty crime dramas. The script by Steven Zaillian is competent but I can’t say that it fully engaged me as much as I would have liked. Yes this isn’t my favorite film genre but I know a good crime drama when I see one. Last year’s “The Departed” was my favorite of 2006, but American Gangster just seems alright in comparison. I also liked Frank’s brothers and cousins, I believe, who all had businesses that were fronts for their drug trade.

What is most interesting about this story is what comes towards the end. Without spoiling too much, we learn that there is really much more crime involved with those who are supposed to be the protectors. Yes, I’m talking about dirty cops (one of which is Josh Brolin in a great sleazy role). Frank becomes an informant and actually ends up helping bring sleazy cops to justice. Sort of the way Frank Abagnale Jr. went on to help out the police at the end of “Catch Me If You Can.” While Frank doesn’t exactly start a job with the NY police department, it is interesting to note the good and bad that lies within the Frank Lucas character. The moral ambiguity is something that Washington brings strongly to his role.

“American Gangster” is a movie that many will love but I think it’s just alright. It’s possible I could learn to love it, but like “The Godfather” it seems more appropriate to admire it than to actually love it. GRADE: B-

Hey there! Do you use Twitter? I'd like to follow you if that
would be okay. I'm definitely enjoying your blog and look forward to new updates.

Once you are done with downloading your audio book, you can play
it on your PC, or burn it to disc, or you can even load it to your i - Pod or MP3 player.
There are even slightly used i - Pods being sold online.
Many others tend to pay attention to 1 genre of books.