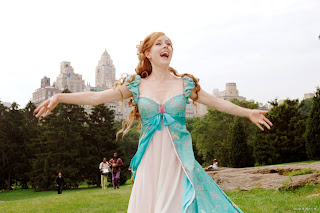 “Enchanted” is a delightful ode to the animated fairy tales everyone grew up watching. Everything from Snow White to Cinderella is referenced in subtle and not so subtle ways. In fact the film even features traditional cel animation for that old school vintage vibe. Giselle is a lonely girl who is rescued by a prince and they are soon to be married after meeting only once. Problem is, his wicked stepmother has banished her to a place where happy endings don’t exist: the live action world of modern day New York City. Each animated character has a human being counterpart and Amy Adams simply shines as the woman destined to find her prince and live happily ever after.

Let’s get something straight right off the bat. If you think you’re too old for this movie, get your head examined! This is a movie than can play to any age and either sex. Kids will love the kiddie stuff and grown ups will love everything else. In fact while this is a movie the whole family can enjoy, it’s really made with adults in mind. I mean, who else would spot all those classic Disney references?

Speaking of which, how many could you count? Look, there’s the woman who voiced Ariel as a secretary. I think I hear Under the Sea in the background of one scene involving a fish tank. Was that Pumba I spotted amongst other animated woodland creatures? Cute and cuddly animal sidekick? Check. Poison apples? Of course. Glass slipper left behind? You bet. Not to mentions countless other fairy tale references. It’s like a cinematic Where’s Waldo. Director Kevin Lima, who also directed Disney’s “Tarzan,” fills every frame with something remarkable to see. And it’s really astounding to see how amazingly clever Bill Kelly’s script really is. He’s obviously spent some time reading up on Disney clichés; one of my favorites being the princess who calls all her animal friends and uses her buddies to clean up any mess in sight during a catchy dance number. And it’s no until you see some of these situations acted out with live people that you realize how ludicrous fairy tales really are when compared to real life.

What’s so lovable here are the actors who fully embrace their characters. Giselle is a grown-up girl who loves to sing and prance her way through life. And Amy Adams (who was Oscar nominated for “Junebug”) plays her with such a terrific naivety you simply want to reach into the screen and knock some modern day sense into her. She fully embodies every twitch and innocent gesture with full force as if it was going to be her very last screen appearance. And heck if Julie Andrews could win an Academy Award for “Mary Poppins” why couldn’t Adams win for this? The film is simply radiant every second she’s on screen. When Giselle comes across a little person in a suit she automatically assumes it’s one of the Seven Dwarfs. A large billboard for the “Palace Casino” features a larger than life picture of a magical castle and she therefore assumes it’s home. Amy Adams perfectly captures her animated counterpart. Every moment is rendered perfectly. You really believe she walked out of cartoon-land and into the hectic world of New York City.

Giselle runs across divorce lawyer and single dad Robert (Grey’s Anatomy’s Patrick Dempsey) and his six-year-old daughter who are pretty much the only two friendly people in the entire city. The child is happy to come across a real life princess and insists that she stay as if Giselle were a lost puppy. Because she’s never head of women’s lib, Giselle is convinced her Prince Edward (James Marsden) will come and find her. And he does, sort off. Marsden spends the entire film in ridiculous purple coiffed attire that clashes terrifically with the city. He spends his time slaying buses; trying desperately to find his true love, through song if necessary. Of course Edward’s evil stepmother (played by Susan Sarandon) is hot on his trail along with her silly goon Nathaniel (Timothy Spall). Pip, the cute chipmunk sidekick, rendered here in expressive CGI, discovers his species cannot talk in NYC. Welcome to the real world, my friend.

The actors do such a great job of bringing their animated characters to life that you kind of forget how cookie cutter the plot really is. It’s a fish out of water tale (that kind of reminded me of the Tom Hanks movie "Splash") with a storybook ending but it’s told with such passion to keep the audience interested, laughing and surprised that we don’t mind the little contrivances here and there. You know who’s going to end up with who and that everyone will live happily ever after, but the journey is so much fun and the songs are so catchy (thanks to Alan Menken and Stephen Schwartz) that it’s impossible not to fall head over heels in love with this enchanting movie. GRADE: A-

There are various factors that have to be considered in selling a pre-owned Rolex Mens view. The replica watches uk crucial consideration may be the tightness from replica watches sale the band. A tighter band ordinarily brings in even more money than an older looking, worn out, loose band. The condition from the dial is significant at the same time. Remember that unique dials are replica watches sale more than refurbished dial. This valuation is rolex replica sale even when the unique piece just isn't in tip-top shape. Of course, the supplies employed in your Rolex Mens are going to be considered at the same time. Most buyers generally appear for replica watches sale created of white or yellow gold, 14k or 18k, platinum, and even stainless steel. Also, acquire note that buyers rolex replica sale for those who possess the unique box and papers with all the timepiece.