What About Bob? “I’m Not There” is a Surrealistic But Disappointing Portrait of Bob Dylan 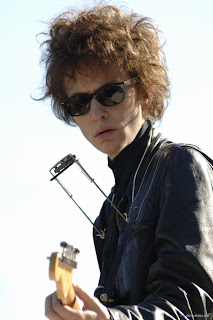 “You’re kidding me right? I…I…I can’t watch this.” Cate Blanchett, I’m Not There

It’s not a new thing to see various actors play the same role. I mean seriously, how many guys have played Batman over the years? You can argue about who did the best job and who brought what to each role. But very few times have different actors played the same role in the same film. The most recent in my memory is Todd Solondz’s wickedly subversive tale “Palindromes” in which seven actors of different races, sexes and sizes played a young girl who just wants to have a baby. He used this gimmick in a fascinating way without forgetting that the ultimate point of a film is to entertain; message or no message. While there’s no doubt in my mind that director Todd Haynes is a talented artist, I’m not sure he can really make film that draws you in and makes you forget that you’ve been sitting in a seat for over two hours watching a screen.

Hayne’s film “I’m Not There” is supposed to be a surreal look at the many lives and personalities of singer Bob Dylan. He’s been such an iconic and bizarre pop culture phenomenon that it’s not surprising a filmmaker would want to take a weird look into the artist’s crazy life. Haynes sees Dylan as living 7 different lives and therefore he implores 7 different styles of directing to each of these stories and has 6 different actors play a version of Bob Dylan throughout the film. Each Dylan has his or her own name and each is supposed to represent Dylan in various stages in his life. I do not know too much about him and perhaps that is why I found all of this less than thrilling.

See this film if you are a really, really, REALLY big fan of Bob Dylan or if you can stand over two hours of surrealist, visually striking but ultimately mind-numbing images that don’t really gel into an enjoyable story. I actually enjoy Cate Blanchett so I was really drawn to the film because she plays an androgynous version of Dylan named ‘Jude.’ Jude is at the point in Dylan’s career when he decided not become a political spokesperson and decided to concentrate on the electronic sound of rock n roll. His fans didn’t really like his new sound and they promptly booed him in the film. Believe me, I wanted to join them.

What I really didn’t like about the film was how haphazard it seemed. There’s really no story here so if you go to this film to learn more about Dylan you’d probably be better off reading his Wikipedia page. This film won’t make any new Dylan fans. If you’re expecting Walk the Line, just walk away. I know I may sound like some guy who walked into the wrong film, but I knew this film was going to be strange going in which I don’t mind, but it just seemed incoherent. It flashes a bunch of random images at you that don’t mean anything on the surface and this gets old after awhile. This is a film that would be more fun to dissect in film class rather than to enjoy as a Saturday afternoon getaway.

The film is surrealistic but not interesting. It doesn’t grab you. It’s cold toward its audience and for someone like me it can be a tedious experience. It's made nor a narrow audience and those Dylan fans are more likely to be rewarded. There are things that I admire here. I like the original approach of having different actors playing the different aspects of Dylan’s personality. We get a conglomerate of talented actors who portray the mysterious singer in a variety of ways. We get Christian Bale as folk and born again Dylan, Heath Ledger as celebrity Dylan, Richard Gere, in the most dull sequences, as outlaw Dylan, Marcus Carl Franklin (who is Black and a child) as the train hoppin' youthful Dylan, and Ben Wishaw as the Dylan who doesn’t really get to do much except narrate the film. I was obviously most impressed with Blanchett who is worth seeing and will likely be a best supporting actress nominee. There are other notable actors here and there like Julianne Moore as a Joan Baez-type, David Cross as Allen Ginsberg and a nearly unrecognizable Michelle Williams.

I understand part of the film’s message about the power of celebrity and how famous people are looked at as if they were God-like creations, but most of it really went over my head. I didn’t really grasp the symbolism which was frustrating and I’m sure many people wouldn’t get it on a first viewing. But the thing is, I really don’t want to see this movie again. The film really is a direct reflection of the mystery that is Dylan which I guess in a way makes it successful. It’s obvious Haynes knows Dylan inside and out and I admire that but this isn’t a film that’s easy to enjoy. He seems to have made a feature length music video without making a logical story worth investing time in.

The film's one and a half minute teaser trailer is brilliant. It implores great use of Dylan's "Like a Rolling Stone" which doesn't even appear in the film until the end credits (and can't even be found on the CD soundtrack!) You’re morel like to be entertained by the trailer than the film. If you listen to Dylan songs on repeat or if you can find surrealism entertaining than this is the film for you. This is a movie that is original, stylish, and beautiful and yet I couldn’t really stand it. Nothing is more disappointing than that. GRADE: C-

Hello, i think tɦa i saw you visited my website so i came to “return the favor”.I am
attempting to find things to enhance my web site!I suppose its ok to use ome oof your ideas!!

Whats up are using Wordpress for your site platform?
I'm new to the blog world but I'm trying to get started
and set up my own. Do you require any coding expertise to make your own blog?
Any help would be really appreciated!