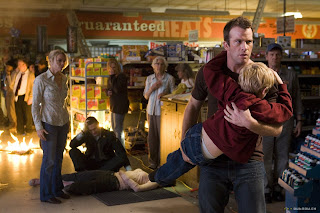 Attention shoppers! Goo Light Special in aisle seven. The other Capote in aisle three. This is probably the best horror film to ever take place in a supermarket. And that’s a good thing. We, along with dozens of citizens of a small Maine town, are trapped inside a grocery store when a thick, ominous white cloud covers the entire building. A man, bloodied and weak, running for his life who ends up in the market, insists that everyone gather inside because there is something inside the mist. And the guy is certainly right because there are some horrific beasts in this fog that no one would ever be happy to encounter. We’re talking about creatures straight out of your darkest nightmare; in fact, they’re right out of the morbidly genius mind of one Steven King.

Yes I did mention in my title that “The Mist” offers a religious allegory. One of the citizens trapped in the store is Mrs. Carmody (a perfectly cast Marica Gay Harden) the local religious loon. After it's apparent that those trapped in the market are doomed she begins to spout passages from the Bible that insist God is getting back at mankind’s past sins. Of course there are ones that believe she’s nuts (myself included) and those that begin to follow her as if she’s a born again female Jesus. The other unofficial leader is David (competent B-lister Thomas Jane) who is trapped along with his young son (played by Nathan Gamble). David is a rational man who probably has the coolest job in the world: designing posters for Hollywood movies.

Director Frank Darabont’s, who also wrote the script, main goal is to create suspense. We don’t really know what’s out there at first and that’s good. The first creature stuff we get to see are some scary tentacles creeping underneath a loading dock door. And we see a less important character dragged to his bloody death. This isn’t any ordinary monster. And as the film progresses the monsters get scarier and almost unbearably creepy. But these creatures aren’t the only monsters: human beings can be just as scary in such a ridiculously stressful situation. Darabont is an assured director. While “The Shawshank Redemption” and “The Green Mile” are his biggest successes, let’s not forget this guy started in B-movie horror films. He co-wrote the remake of “The Blob” for God’s sake! Here, he creates almost unbearable tension and some completely disturbing sequences.

As soon as it becomes clear that these people’s lives are seriously at stake (some people attempt to leave the market only to be ripped apart by the creatures lurking just outside) these ordinary citizens start to become rather loony. As Mrs. Carmody insists, it’s time to choose sides. Will you side with her and God. Will you pray for redemption or will you continue to not acknowledge the sins of mankind and face this horrific wrath of God? Better choose wisely, or you might end up a sacrific of the religious nutbags. David, along with a few other completely sane folks decide that they might be better off taking their chance with the malevolent creatures than these freaks. And it dares to raise the question? What is really more terrifying, giant bug-like creatures or people who insist that God is the only one to answer to? “The Mist” is sort of like “Lord of the Flies” meets “Alien” in a supermarket.

This is a film that is so easily likable because it seems to get everything right. It’s a character driven monster movie that knows suspense is its asset and uses gory effects to justify the tension it has created. And the film is almost disturbingly pessimistic that you simply have to thank it for not just wrapping things up in such a neat little package. It offers a mild explanation for this mist and let’s just say that King and Darabont don’t exactly paint an optimistic view of our government.

"The Mist" is the rare film that combines scares, suspense, gore, character, and themes of conspiracy, human nature and religion into an entertaining package. And it’s the first film in a long time that literally made me turn away from the screen due to an intense sequence involving overgrown spider monsters. This is a chilling roller coaster ride guaranteed to the give you the willies and damper your day. Thank God. GRADE: A-