Little Barbershop of Horrors: Tim Burton’s Adaptation of “Sweeny Todd: The Demon Barber of Fleet Street” is a Cut Above the Rest 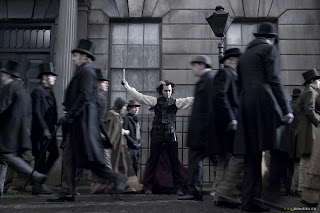 To put it simply “Sweeney Todd” the Tim Burton directed adaptation of the dark yet beloved Stephen Sondheim musical is one of the filmmaker’s greatest achievements. It seems to borrow all the best elements from his previous efforts and he thrusts them into high great to create a cinematic experience that pleasure the senses and makes you feel good. I can’t exactly say that you’ll be running out for a shave or a meat pie anytime soon, but the tale of a serial killer barber and the woman who turns his victims into delicious meat pies is such a mysteriously intriguing tale I can’t help but say it’s definitely one of the best filmed musicals of recent memory. Forget “Dreamgirls,” forget “Rent,” forget “The Phantom of the Opera” “Sweeney Todd” is open for business and it’s a simply smashing experience.

Take the beautiful production design and costumes of “Sleepy Hollow,” the performances of “Ed Wood,” the musical whimsy of “The Nightmare Before Christmas,” the awkwardness and outcast themes of “Edward Scissorhands,” and the dark brooding of “Batman” and you have “Sweeney Todd” a wonderful symphony of images ands music that pleasures ever part of you. Burton favorite Johnny Depp signs his heart out (in a weird David Bowie sort of way) as Benjamin Barker. He has the perfect wife and child, but an evil, jealous judge (a deliciously malevolent Alan Rickman) decides Benjamin’s life is too perfect and sends him off on false charges to rot in prison. Benjamin returns to London, where our story takes place, years later as the brooding and vengeance seeking Sweeny Todd. He sets up shop as barber intent on finding the man who wronged him. Meanwhile, Mrs. Lovett’s (perfectly cast Helena Bonham Carter) meat pies in her pie shop are the “worst pies in London.” It’s only a matter of time before Todd and Lovett team up to turn his victim’s into tasty meat pies. Doing this serves two purposes; it hides the evidence and creates a business boom for Lovett’s shop.

This is the first time since Ed Wood that Burton has not enlisted the help of composer Danny Elfman. But this is hardly an issue. Famed musical composer and lyricist Stephen Sondheim’s musical is a perfect fit for Burton’s demented cinematic sensibilities. It’s as if it were written for him, although it was a Tony Award winning musical staged over thirty years ago. The music is catchy and the movie benefits greatly from being directed by a film director instead of a theater director adapting a play. I always tend to go back to the film version of “the Producers” that was a dreadful film that failed because of the staginess of its production. It felt like it consisted of just filmed stage numbers. Burton, having never official directed a live action musical (Nightmare Before Christmas and Corpse Bride are his previous musical efforts) has found a new voice as a filmmaker. He stages musical numbers based in reality, yet we never for an instant feel uncomfortable when characters break out in song.

“Sweeney Todd” is punctuated with just the right bits of gore and blood and it fits perfectly with this dark tale of revenge. Depp and Bonham Carter work tremendously well together. This is perhaps finally the film that will give Burton his due as a tremendously talented filmmaker. Whether his wins an Oscar, I’m not sure; but who else really could have pulled off this film as well as he did? To think that this man has gone from directing “Pee Wee’s Big Adventure” to this says so much. “Sweeney Todd” is Tim Burton’s swan song and it’s bloody good indeed. GRADE: A