Child’s Play: “Atonement” is a Grand Achievement That Isn’t Just For British Eyes Only 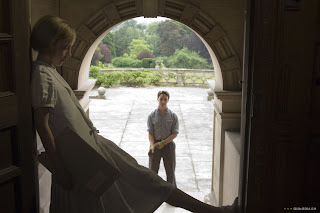 If you know me at all, you’ll be aware that I am the last person to go see a British period piece. Yuck city. “Sense and Sensibility?” Yawn. “The English Patient?” Oh please. “Gosford Park?” Zzzz. So it was with overwhelming surprise and delight that I found Joe Wright’s (whose previous effort was the very British Jane Austen saga “Pride and Prejudice”) wartime drama “Atonement” to be completely delightful. It has interesting characters, suburb direction, a great story and wonderful technical achievements. Anyone wondering whether they should just skip this because of the English accents is going to be missing out on one of the best dramas of the year.

Most surprising of all in “Atonement” is the shockingly amazing performance of little Saoirse Ronan, who commands the screen and nearly makes as good a performance as Helen Mirren in The Queen. She takes a character that is almost immediately unlikable and gives her a soul that you simply can’t look away from. Ronan is Briony, she’s a 13 year old girl who lives the rich life in the English countryside circa the early 1940s. She’s an intelligent young girl, since she writes plays for her and her cousins to act in for fun, but she’s still just a little girl. Certain circumstances lead her to accuse her older sister Cecelia’s (Keira Knightly) gardener lover Robbie (James McAvoy) of something very heinous. This sends McAvoy away to prison and eventually to fight in World War II. These are two lovers that just can’t be together and it’s all because of a little girl’s simple misunderstanding.

Of course, we assume it’s a misunderstanding, but remember I said Briony isn’t a stupid girl. She’s a friggin’ playwright for God’s sake! Perhaps it’s a little bit of jealously between her and her sister that causes this mess or perhaps it’s simply the innocence of being a child. Who knows really. But what’s so special here is the way the screenplay let’s us see events from multiple points of view. We see what goes on between Cecelia and Robbie from Briony’s point of view. We interpret it as a child but then we see what really happens and we’re back to being adults. This is a movie that hinges on an important and influential role and Ronan nails it (as do Romola Garai as Briony at age 18 and Vanessa Redgrave who is so memorable in nearly two scenes as an elderly Briony still seeking atonement for the actions of her childhood).

What a technical achievement this film really is. Director Wright employs a nearly six minute tracking shot when Robbie goes to war that is simply stunning. There are too many beautiful shots to even mention. Each scene is a portrait of the time. And each actor is terrific in reflecting that time period. And probably my favorite of all is Dario Marianelli’s terrific music, which incorporates the sounds of a typewriter into his score. The pounding of keys goes perfectly with Briony’s rigid movements. This is “Mickey Mousing” at it’s best and most complex.

“Atonement” is a film that has garnered a lot of Oscar talk, it’s certainly deserving of whatever amount of nominations it receives, although it’s steam has slowed down some over the past couple weeks. This is a film that seems like it was made to win awards, but nothing is further than the truth. It’s a film that will surprise you with how good it really is and for a British period piece set in war torn England that’s certainly saying a lot from me. GRADE: A

To add my insight into the broader need much information should I dig, one of his articles, vidio also one of his pictures as I can see on this page, please be able to provide feedback to me.
At the end of the comment word I say thank you.
alat bantu sex pria
obat kuat pria
Obat kuat, alat bantu sex pria wanita 18+

Watch movies on the online showbox application where all the latest movies are available. Developer Showboxvpn.com specializes in providing software and providing users with the most used free apk programbox today.