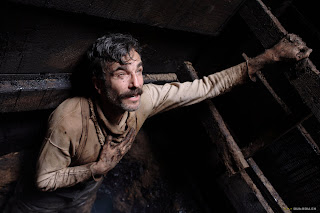 “There Will Be Blood” is a film I can’t wrap my head around. I just don’t get it. Paul Thomas Anderson is a great director and I love “Boogie Nights” and “Magnolia.” And if theres one thing those two films aren’t it would be boring. Magnolia is over three hours and I don’t find it boring. That’s probably because there are so many fascinating characters to be found. But in Anderson’s latest film, many of which are touting as the “new American masterpiece” we only get about two interesting performances. Daniel Day-Lewis, who is always good, and the relatively little known Paul Dano, who shined last year as the silenced brother in “Little Miss Sunshine.” “Blood” is two hours and forty minutes of uninteresting storytelling that is about as much fun as escaping an oil spill.

Day-Lewis is Daniel Plainview. He’s beings living the American dream out West in the early 1900s when he strikes oil. Soon this black liquid gold begins to take ahold of him (surprise surprise) and it turns him into an evil tyrant. He even sends off his deaf son (due to an accident during an oil disaster) on a train that’s headed to who-knows-where. Then we have Paul Dano playing Paul Sunday, who is a young minister. He’s one of those religious hotheads who casts demons out of the less holy. He’s more of a revelation than Day-Lewis simply because he’s a fresher face.

Then you can fill in you own assumptions of what happened, because to be honest with you I can’t remember a whole lot from this movie, because at times it’s almost simply forgettable. The cinematography from Robert Elswit is beautiful but not as amazing as I’ve seen in films this year like “The Assassination of Jesse James” or “Atonement.” The score by Radiohead member Jonny Greenwood is weird and different, which I liked, but it doesn’t exactly cause this to be a recommendation.

To be frank I felt as though I was watching a boring adaptation of a unexciting book I would have had to read in high school English. Anderson based the screenplay on the Upton Scinclair novel “Oil!” which is probably why the film is so draggy and dull. It feels as if it were made in the 1930s, so if you’re a fan of that period or if you’re a film elitist than please sir, be my guest. And I wouldn’t even say that the shear length is the sole reason why I disliked this film; if it had been only an hour, it sill would have been every bit as tedious. I mean nothing exciting happens in this movie; “Atonement” is a British period piece and it had ten times the amount of suspense, intrigue and excitement.

Daniel Day-Lewis the favorite to win at the Oscars and after seeing his real life personality at the Critics Choice Awards, I have to admit that he does completely transform himself into this character, but it is honestly such a dreary ride that you’ll get just as much a sense of his acting chops from the film’s theatrical trailer. Watch that and you can save yourself some money and a numb butt. GRADE: C
NOTE: Roger Ebert says of 'There Will Be Blood': "Plainview's only goal in life is to become enormously wealthy, and he does so, reminding me of "Citizen Kane." An even easier example of why this movie is so boring...