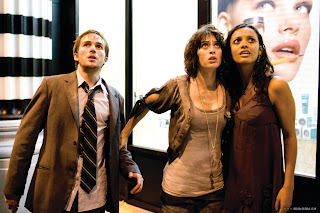 Wow. We’re nearly three weeks into January and I am 2 for 2. The last January release I saw was “Cassandra’s Dream,” Woody Allen’s new crime drama and now “Cloverfield” an intriguing film with an even more intriguing viral marketing campaign that has certainly paid off. Of course, I’ve stayed away from the obvious dreck such as ‘Mad Money,’ ‘In the Name of the King,’ etc. Cloverfield, which was previously only known by it’s release date of 1.18.08 captured movie going audiences way back when Transformers first hit the big screen last summer. We got to see a partygoer’s view of a menacing force wrecking havoc in Manhattan. The Statue of Liberty’s head was thrown down one avenue, while the entire city panicked. What exactly was this unseen force?

If you’re expecting a traditional monster movie please look elsewhere. “Cloverfield,” while not altogether the most original film to come out, is clever because of the way it is executed. There are no steadicam shots or sweeping camera movements. In fact, this is filmed much like “The Blair Witch Project” in which the camera is mostly operated by the characters in the actual film (Although how much the actual actors filmed, is probably close to nil). We get to see 86 minutes during one evening with a small group of characters. Rob (Michael Stahl-David) is an up and coming young guy living in Manhattan who has accepted a job in Japan. His brother Jason (Mike Vogel) and his girlfriend Lily (Jessica Lucas) and other assorted friends have thrown him a surprise going-away party. Hud (T.J. Miller) is in charge of the videotaping the evening and making sure all the guests proclaim their well wishes to Rob to the camera.

The film, written by Drew Goddard (a writer on TV’s Lost), and directed by Matt Reeves is slightly ingenuous in that it gives a perfect excuse for why the film is shot the way it is. The film opens with a title explaining that the following footage is property of the US Government having something to do with a case known as “Cloverfield” and that the footage was found in the location of where Central Park used to be. The opening shots are of Rob and his girlfriend Beth (Odette Yustman) fooling around in bed but soon the footage is replaced by Jason who tries to figure out how to work the camera. (He has accidentally begun filming over Rob’s footage). The rest of the film is character set-up at the party, which soon rages on, and we’re introduced to a few other characters including Lizzy (Marlena Diamond).

Soon rumbles are felt and the building begins rattling and rolling. The party moves out onto the roof when an explosion is seen from far away. Soon the State of Liberty’s head is rolling down the street and buildings start coming down as people begin running for their lives. Our little band of characters stay together as Hud continues to film. It is soon revealed that a grotuetes creature of unknown origins has descended (or ascended perhaps) on the city. It is unflinching and uncompromising and it’s really, really big. From here on the film is a roller coaster of thrills and chills. The film builds up some terrific suspense and there are some fun and genuine scares to be had here. I definitely was squirming in my seat.

I don’t really want to give too much away, but I thoroughly enjoyed “Cloverfield.” It’s a movie that actually lives up to its hype and provides a good thrill. There’s really not exposition or explanation for why this monster is attacking and that’s the film’s point. We never cut away from Hud’s camera. This is all seen through the eyes of a small batch of survivors. Parts reminded me of Steven Spielberg’s “War of the Worlds.” That was a film that also didn’t cut away from its main characters to the inside of a government meeting with the military. It was seen through the eyes of a working class family and allusions to 9/11 were apparent and warranted. In “Cloverfield” the camera work is much closer to “Blair Witch” (and the film also has no music score) but with much, much better production values. If you don’t believe me sit and watch all the credits after the film ends, and you’ll be sitting there for a while, left to ponder how so many people were involved in making something that looks so cheap and simple, yet is executed masterfully with style, flair and impressive effects. And plenty of scares to spare. GRADE: B+