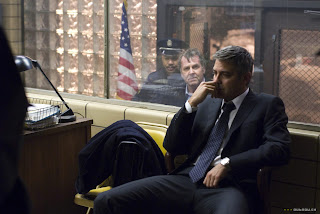 I’d be lying if I said I didn’t find most of “Michael Clayton” a bit baffling. I was following along without a problem, but then half way through it sort of just lost me. I felt I need subtitles to explain what was going on. I thought, this what Paris Hilton must feel like when she attends the cinema. But although I found “Clayton” to be a complex drama, I never found it boring or uninteresting. Like Mission: Impossible it was difficult to understand but not difficult to enjoy. However, I’m not so sure it deserves Best Picture accolades, it is a worthy law drama that has a lot to say about ethical choices people have to make in their everyday lives.

George Clooney is the ever-likable movie hero. Women want him and men want to be him. He’s got an everyman charm about him that makes him perfect in the role of Michael Clayton. Michael isn’t a trial attorney, but rather a “fixer.” He gets people out of legal messes. As we see in the beginning of the film, he’s getting a client out of a little hit and run pickle. Michael is the go to guy to get out of a legal jam. And Michael Clayton is about to hit the mother of legal jams.

It turns out that a large corporation has been poisoning people for some time (think ‘Erin Brockovich’ or ‘A Civil Action’). Tom Wilkinson, who is a member of Clayton’s firm, is defending the corporation. But the more he gets into the lawsuit the more he realizes he can’t just defend these people. He goes off his meds and he goes wildly manic-depressive. He strips off his clothes during a meeting and he goes completely and utterly nuts, to put it lightly. Tilda Swinton is also a lawyer on the side of the corporation. We see the results of her actions. She has to practice her speeches in front of mirrors because I think deep down she’s really putting on an act. Her job is to defend this corporation and she’ll go to any lengths to do it.

And that brings us to the first plot point of the film’s twisty, intricate screenplay (written by Tony Gilroy who also directed). Nearly twenty minutes into the film Michael Clayton is driving down a road the morning after talking to the hit and run guy, he sees some horses up on a hill and he gets out of his car and low and behold, his car explodes. Someone obviously wants this man dead and we then flash back four days earlier and we learn what Michael Clayton has been going through.

I don’t know if I’d really call the film a thriller, although it has moderate suspense. Most scenes feel like something scary is going to happen, but then it never really does. Which kind of leaves you hanging. But that’s ok; I don’t need car explosions to have a good time at the movies. What is really most difficult about the film is putting its complicated plot together. It was hard to figure out what exactly was going on, as the film requires you to pay very close attention to every detail. This is Gilroy’s directorial debut and he recently received Best Director nomination from the DGA. Perhaps an Oscar nomination is in his future?

While I wouldn’t call Michael Clayton one of the best films of the year, it has enough good acting and twists and turns to keep the viewer interested. Although I could see the general audience finding it “slow” or “boring.” It’s certainly not a slow as ‘There Will Be Blood’ and it’s definitely not as confusing as ‘I’m Not There’ but it’s simply a good legal drama that has more positive aspects then negative. GRADE: B

Patek Philippe and Rolex consistently appear to apperception if top dollar watches appear up in conversation. Examples that were beat alone on break and in excellent or abutting to excellent condition, of course, accompany the a lot of money. Watches with provenance--examples endemic by celebrities or rolex replica fabricated especially for acclaimed individuals--always accept added amount if replica watches uk they appear with adapted documentation.With that said, in her book Vintage Wristwatches (Krause Publications), above Antiques Roadshow adjudicator Reyne Haynes (who now goes by the name Reyne Hirsch) credibility out, "Much like affairs a rolex replica watches monogrammed section of argent collectors generally don't wish anyone else's name, business affiliation, marriage anniversary.