Me, Myself and Eye: “The Diving Bell & the Butterfly”is One of the Most Emotionally Charged and Beautiful Films of the Year 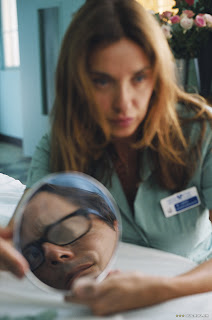 ‘The Diving Bell & the Butterfly,’ based on Jean-Dominique Bauby’s real life memoir, is one of the most emotionally charged films of the year (the other being “Into the Wild” which is similarly about a young man’s personal journey inside himself). The immediate, gut reaction my body had while watching this film was nearly unprecedented. It was the first time that I nearly broke down during the end credits. You watch this film for nearly two hours and you’re put into the position of a man who is trapped in his own body and you have get a stirring reaction of desperation that is simultaneously uplifting yet almost unbearably depressing because it almost makes you feel like your life isn’t worth a penny. To imagine what this man has accomplished, literally with the blink of an eye, is such an astonishing feat it is nearly impossible to imagine. But it isn’t impossible because this brilliant film is living proof of person who could overcome his own imprisonment.

The film is astonishingly directed by Julian Schnabel because he gets inside us from the opening frame. We are put into the position of a person we cannot see. We see what he sees. And for nearly a quarter of the film we’re “stuck” in this position. We’re just as worried, concerned, frightened and claustrophobic as he is. Gradually the film opens up and we’re actually shown the person we have identified with. We learn that he’s had a stroke, which sent him into a coma, and when he emerged he was paralyzed from head to toe. This man was Jean-Dominique Bauby who was the editor for French Elle Magazine. He was divorced from his wife but they had three children. He had an elderly father he took care of. And now he needs all the care he can get because he’s trapped in his own body. He can think rational thoughts, which we hear out loud as a voiceover. He has to learn to communicate through blinking his eye. He begins by being asked simple yes or no questions. One blink means yes and two blinks means no. And by the end of the film he would have written an entire book about his experience. He titles his book ‘The Diving Bell and the Butterfly.’ The diving bell is a metaphor for his entrapment. He feels as if he’s in the water in a diving suit and he can’t come up to the surface, but eventually he sees himself as a butterfly, emerging from his captivity. It’s such a rewarding and poignant experience that only a motion picture can provide.

Of course while Jean-Do’s body is stagnant, his imagination isn’t. He has a lifetime of memories in his fully functional memory bank that he can escape to with the help of standout director of photography Janusz Kaminski. Kaminski creates a fantastic world in which we see through the eye of our hero. The visions he is able to achieve in translating this story is nearly indescribable. He is sure to be a leading contender for the Best Cinematography Academy Award. Through some stunning shots we get to learn about Jean-Do’s past. His scenes with his ex-wife and children are simply touching. And Mathieu Amalric’s performance is magnificent and moving. We instantly feel attached to this man, we feel like he’s our family member and we only want to see him overcome this unbearable condition.

This is a film that no review can do justice to. You just have to see this film to believe it. It is an extraordinary work of vibrant imagination. It’s nearly one of the most perfect foreign films I’ve ever seen and it’s one of the best films of this year. I can’t even explain the emotional reaction this film caused me. “The Diving Bell & the Butterfly” is simply a beautiful piece of filmmaking. It could have easily become a simple Lifetime movie about a man with a disability, but it transcends cinema. It goes beyond what an average filmmaker could accomplish. It is stunning from beginning to end. If you thought "Pan's Labyrinth" was an amazing visual journey, wait until you see "Diving Bell." It's one of the best foreign film's I've ever seen. In other words: a must see. GRADE: A

PS - And it's a winner of two Golden Globe awards: for Best Director and Best Foreign Language Film!