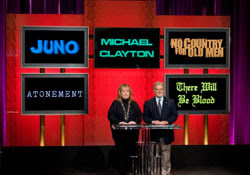 UPDATE: Alrighty, so a few of my hunches were totally wrong. Atonement DID get a Best Picture nomination, but you could tell that its buzz had weakened because poor Joe Wright didn't get a Best Directing nom. Hey, but good job Jason Reitman, who was a complete surprise in the Directing category for Juno. Juno's best picture chances have increased tremendously with this nomination.

Tommy Lee Jones was also a big surprise, he had been talked about a lot in the months past, but his buzz had also died down. I guess not. Good for Laura Linney getting in there for The Savages, a film I particularly didn't like, but I enjoy her so good job. Kudos to Ruby Dee who was one of two noms for former frontrunner American Gangster. If she were to win, she'd be the oldest acting winner and the one with the shortest screen time (under 5 mins for anyone who's counting).


There wasn't much love for Into the Wild unfortunately. Although Halbrook got in there as expected. and it turns out that at last minute the scores for Into the Wild, There Will Be Blood and Enchanted were deemed ineligible. Although Enchanted pulled a 'Dreamgirls' and got 3 of its songs nominated for Best Original Song.

For everything the Academy got right (Javier Bardem! Ellen Page! Viggo Mortensen!) they also got something wrong (no Emile Hirsch? The guy lost so much weight, he turned himself into one of the Olsen twins! No, Ryan Gosling? He made you believe a sex doll was a real person! And Cate Blanchett in Elizabeth The Golden Age? Seriously? I mean seriously??) Oh well, life's little mysteries.

[from Monday]
Ok ok ok. So the Oscar nominations will finally be revealed Tuesday morning, and if you're at all a dork like me, you can't f-ing wait. With so many uncertainties, I'm not sure how I am going to be able to sleep Monday night. It's more exciting than Christmas! I'm not saying I'm the greatest Oscar prognosticator, but here are my fearless predictions of the nominees. Let's see how many of these actually match up.

Here are a few highlights of what i think might occur come Tuseday morning:

Atonement gets the shaft. I think Atonement will pick up some technical award noms, but will be mostly shut out of the main awards. It's most likely big nominee will be Best Supporting Actress for Soarise Ronan, but otherwise the DP and costume designers will be extremely happy on Tuesday. Atonement seemed like a BEst Pic lock months ago, but if I think I'm right, it won't get as many as previously thought.

I'm going out on a wild limb here and saying the same thing aboutSweeney Todd. I don't even think Johnny Depp will be nominated because he was shafted by SAG. Then again SAG hadn't even seen the movie when there noms came out, so that very well could have changed, but I'm just going with my gut.

I think the big question, is how many awards Into the Wild will receive. It's had an up and down award season; it was the top nominated film at the SAGs and the Broadcast Film Critics Assn. It was almost completely snubbed by the Globes (although it did win best song for "Guaranteed") Director Sean Penn got a DGA nod, but it didn't get a PGA nod. It's also received nods from the WGA the ACE. So there's lots of support for this film, but the question remains, exactly how much?

The biggest question is what film will actually receive the most nods. Most of these films will naba few acting nods and technical awards, but there's no Titanic or Lord of the Rings. The year of the sweeping epic is over. (That is unless Atonement gets nominated, but we'll see!)

so without further ado, here are my predictions!

Alternates: Atonement, Into the Wild

Original Score
Atonement
Enchanted
Lust, Caution
There Will Be Blood
Into the Wild

Original Song
Come So Far (Got So Far to Go), Hairspray
That’s How You Know, Enchanted
Guaranteed, Into the Wild
Falling Slowly, Once
Le Festin, Rataouille

Visual Effects
Pirates of the Caribbean
I Am Legend
Transformers

Make-Up
Pirates of the Caribbean
Norbit
300

Foreign Film
Beaufort
The Trap
12
Days of Darkness
The Counterfeiters

Documentary Feature
Sicko
No End in Sight
Nanking
Body of War
Lake of Fire
Posted by Chris at 9:53 PM