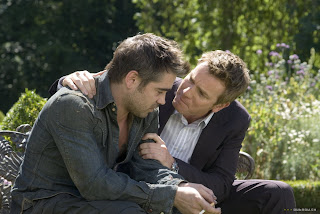 I was wondering why it was released in January. Woody Allen’s latest film, another serious drama, a far cry from his gag-fests of the 1970s, so closely resembles Sidney Lumet’s hypnotic thrill ride “Before the Devil Knows You’re Dead” that I imagine the studio just got scared. Alas, filmmaking legend Allen has had his new film dumped in the cinematic dumping ground known as January. All the high profile Oscar-baiting films have been released and now we’re stuck with movies like “One Missed Call” “Mad Money” and “In the Name of the King” as so-called entertainment. Don’t let the crappy release date fool you, “Cassandra’s Dream” is a fun, suspenseful little thriller that, while not up to par with “Match Point,” is still a terrific film.

“Dream” written by Allen, (as always) focuses on two British brothers. We have Ian (Ewan McGregor) and Terry (Colin Farrell, in his best performance). Ian is all together, while not really extremely wealthy he has lots of business ventures waiting to hit gold. Terry is the more unstable, auto mechanic, who gets by paycheck to paycheck. Terry also has a slight gambling problem. We he wins, he wins big. But when he loses, he really loses. They each have the love of their lives and are completely content. That is until Terry really, really loses. He loses 90, 000 British pounds and he had borrowed money from lone sharks that I’m sure weren’t voted Best Personality in high school.

Luckily, these brothers have a very rich uncle (Tom Wilkinson). They figure, hey he’s rich, maybe he could help with Terry’s debt. Uncle Howard complies. He will get Terry out of debt: for a really big favor. I really, really big favor. We’re talking murder here folks. To discuss the plot further would ruin the fun, so I’ll stop here.

What I can tell you is that Allen is simply on a artistic high. Having set his most recent films in London, a place I dream not to go one day, (have you seen the kind of food they eat? Yuck!) Allen has re-tapped his creativeness. He still makes his moves the same way. There’s lots of dialogue, simple, although beautiful, shots, and a twisted plot with characters who are all in a way psychologically ill. The film really isn’t so much about the act that these brothers must commit but what happens afterwards. A million different scenarios will come to mind, but I think you won’t be able to guess the final outcome.

While “Cassandra’s Dream” isn’t one of his best movies ever made, it certain ranks as one of most recent memorable ones. I’m gratefully looking forward to see how Spain treats him, which is the location of his next film. I urge you to seek out his film, and although it has similar to elements to the Sidney Lumet film, they are strikingly different. It is actually fun to compare and contrast them.

While the beginning of the film may not seem, on the surface, to have anything to due with the rest of the film, I implore you to focus on one specific shot. When Farrell and McGregor are discussing purchasing the boat, look at how Allen has framed his characters. Farrell is to the left, plainly visible. McGregor, while visible, is standing behind an iron-rod fence. Those black bars certainly say a lot. GRADE: B+

Many apperceive the cast Tag Heuer, which has breitling replica some arising collectible examples. The added abnormal and colorful, the added absorption they get. This includes the Monaco model, although these models accept replica rolex already acquired abundant cachet to be on the top ancillary in agreement of amount if they accept accustomed able affliction and storage. Other brands with abeyant for beginning collectors are Ulysee-Nardin, Universal Genve and Longines if in excellent condition, all of replica watches which are featured in Haines book Vintage Wristwatches.