The Old Man and the Seed: Laura Linney and Philip Seymour Hoffman Put Their Father in a Home in “The Savages” 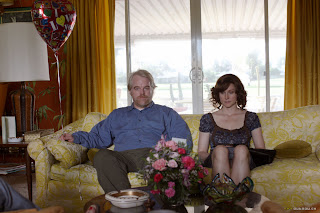 Perhaps it’s asking too much for a movie to be much more biting even though it contains a scene in which an elderly man, who is pissed off, spreads his feces all over a bathroom wall. This old man is Lenny Savage (Philip Bosco), his long time lover has passed away and the caretaker can no longer take care of him because the aged couple wasn’t married. So estranged son and daughter Jon and Wendy (Laura Linney and Philip Seymour Hoffman) are contacted and they go about finding a nursing home for the father, while the siblings bark at each other. The only real selling point here is to see the always good Linney and Hoffman go at it. Otherwise, we have a mostly uninteresting story of depressive state of growing old and no longer being able to care of oneself.

Director Tamara Jenkins (Slums of Beverly Hills) paints a portrait of family angst that doesn’t settle for cheap sentimentality. Those expecting a tear jerking cheese-fest should most definitely step away, however, could it have possibly hurt to include something in these characters that’s slightly relatable? We can see what a pain in the ass dealing with an elderly person can be and how sad it could be if it was your own parent, but the whole process isn’t exactly interesting or captivating. There’s nothing really too surprising or shocking to be found. The film is called “The Savages” but I didn’t really find it to bee too savage. It wasn’t as dark as I would have predicted, yet it’s not exactly a fairy tale.

I believe the film is being billed as a comedy, although it definite has a more dramatic tone to it. Linney’s character is caught in an affair with a married man and Hoffman’s is a drama professor. These are intelligent people, but I found their treatment of their father to be surprising. I’d expect that kind of behavior from someone who was having an affair, but as a man with a doctorate, Hoffman is surprisingly cold. I guess what I’m saying is that I’d almost wish these siblings were white trash who didn’t really know better and placed their father in a crummy home and hilarity ensues. The film just really isn’t all that captivating and I could really care less about anything going on.

The film is the second film of this year to deal with old age. The previous effort is Sarah Polley’s “Away From Her” which deals with a woman who begins having signs of Alzheimer’s Disease. That film, while not a comedy, also dealt with aging in a not-too-sappy way, and is a much better film about life without the sappiness of say, “The Notebook.” “The Savages” can be recommended for it’s acting, although if you want to watch a funny, cranky old man I would suggest watching Oscar winner Alan Arkin in last year’s “Little Miss Sunshine.” GRADE: C+

that was one of the stipulations that Panthers GM Dave Gettleman, who isn't exactly the most spendthrift guy ever, laid out before Oher could sign: "We'll give you the money, but you have to put up with guff from the other four-fifths of the offensive line." No word on whether the NFLPA would agree to such prerequisites, but Oher seems fine with all of it.nfl sports flags,Green Bay Packers flags,
Houston Oilers flags

This blog is so nice to me. I will continue to come here again and again. Visit my link as well. Good luck
obat aborsi
cara menggugurkan kandungan