Sister Act: Nicole Kidman is “Margot at the Wedding” 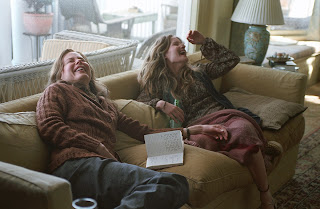 I don’t know director Noah Baumbach personally. All I know is that he directed The Squid & the Whale and now he has brought us “Margot at the Wedding.” But if there’s any way to know a person just from the films they make, it’s Noah. His films are filled with things you would never see or hear in mainstream films. And assuming he takes bits from his own life and inserts them into his movies, we can deduce he’s had one strange life. He takes taboo subjects and places them in front of you. He’s much more true to life than most filmmakers would like to acknowledge. And for that, I have to give him credit. “Squid” was a strange film that took a few viewings to get used to. It’s strange moments is what elevated it above regular, every movies. “Margot” is also very strange, but in a way it almost works against it.

Nicole Kidman plays Margot. Margot has a son Claude (Zane Pais). They arrive at the home of Margot’s sister Pauline (Jennifer Jason Leigh). Pauline is getting ready to marry Malcolm (Jack Black). Pauline has a daughter Ingrid (Flora Cross). These family members spend a few days together before the wedding. And in those few days we pretty much get to learn a lifetime of what makes these characters act the way they do. This movie works because of the actors. They talk about things and people we don’t’ know about and it’s up to us to figure out what they’re talking about. It’s kind of amazing in a way. It’s like jumping in on the middle of a stranger’s conversation. We don’t know what they’re talking about but by the end we kind of get the history.

The film is mostly talk, so if you’re not a fan of dialogue stay away. But this isn’t your average dialogue. You have to hand it to Noah for creating such an odd, quirky script. This is a movie where you’ll have male characters discussing how they try urinating by sitting on the toilet. You’ll have discussions between mother and son about the son’s use of deodorant and whether it causes cancer. He gives his actors so much to do and they elevate the material to a level that is rare in most films today. However, I can’t really say I cared much about what was going on. In “The Squid & the Whale” I found most of the characters interesting. They all weren’t the most likable but you at least care about what’s going on. In “Margot” the characters seem so whiney and depressed that you almost want to stage an intervention and commit them all to a mental institution.

I have to give credit where credit is do. The actors do a great job with the difficult material they have been given. There are some laughs here although I can’t really say whether this is a comedy or a drama (Although learning about how Margot tried baking her sister in the oven when they were little was a little priceless). Margot is a Wedding is certainly an original creation (what about those wacky neighbors?!) and something you’ve never seen before. It’s really an actor’s showcase, but be prepared to declare, “I don’t think we’re in Kansas anymore, Toto.” GRADE: B-

PS - Was it me or was the cinematography rather distracting? Some scenes were so underlit I couldn't tell the difference between Jack Black and Nicole Kidman.

Pretty! This was an extremely wonderful post. Thanks for supplying
these details.