The Brothers Dim: Money Makes the World Go Round in “Before the Devil Knows You’re Dead” 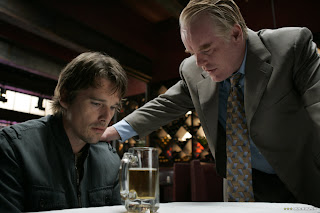 Ethan Hawke and Philip Seymour play brothers in Sidney Lumet’s “Before the Devil Knows You’re Dead.” They need money and fast. The only way? Robbery. Of course this won’t be any ordinary robbery. This will be a simple and quick scenario: they will rob their parent’s jewelry store. They get the money and their parents will get insurance money. No one will be harmed and everyone wins. Not exactly. The plot of “Devil” is very similar to the equally entertaining dark thriller “Fargo” in which a family man plots to have his wife kidnapped so he could collect his wealthy father-in-law’s ransom. In that film things go terribly wrong in a mostly black comedy sort of way. Lumet’s film is much more a straight thriller that bends time and shows scenes from different points of view. It’s gripping from start to finish.

Ethan Hawke’s performance is phenomenal. He takes makes an unsympathetic character sympathetic. He’s pretty pathetic and easy to dislike, but we’re with him almost 100 percent as soon as everything hits the fan. Philip Seymour Hoffman is obviously sensational as well. I think I like seeing him as a bad guy more than the good eye. He seems to have more fun with the role.
Marissa Tomei also proves that she act without Joe Pesci’s help. Albert Finney is also transcendent. It’s amazing to see what his character goes through and what leads up to his character doing something he feels he must do.

Sidney Lumet’s Oscar worthy direction is simply outstanding. You would never guess that a man in his 80s would have the lucidness and prowess to take on such a film. But we learn from his past films, such as the heist-gone wrong thriller “Dog Day Afternoon,” that he is certainly the man for the job. Like in that film, we tend to sympathize with characters who do bad things (i.e., rob people) because they’re in a position where there’s nothing left to do but turn to crime to succeed. And by showing the depraved acts caused by these characters we can only learn that this is NOT the way to make a living. It works almost as an anti-violence tale without the preachiness of a PSA. The story is time shifted in places as are most film in this post-“Pulp Fiction” world. But unlike Tarantino who relies sometimes too heavily on dialogue, rookie Kelly Masterson’s script is all about the story and how it affects its characters.

Carter Burwell’s score is so essential it’s practically a character. Nearly half of the tension felt is because of the haunting music that accompanies the haunting action. The scene in which Hawke’s character realizes the robbery has gone terribly wrong is one of the most memorable scenes from a film this year. You can instantly feel every single emotion that he is going through. You get that horrible feeling in the pit of your stomach, like you’ve been punched in the gut. This film has the nerve to take your breath away but has the kindness to bring it back to you. It’s as exciting and compelling a film as you’ll see all year. GRADE: A-

The perception and the concept of your producers are to supply luxury products including TW Steel brand of replica watches. It is actually meant for men and women. You can find various sorts of the fake rolex sale which might be obtainable within a range of designs. The folks that have information plus the realization regarding the TW Steel brand of rolex replica sale will usually prefer the items. Since the TW Steel brand of watches can be costly you might be able to choose on your economic plan. Irrespective from the price replica watches uk you are going to get the ideal design as well as the top quality that's promised by the manufacturer. The brand grew to turn into exceptionally fake breitling for their characteristic style. But the reputation may also be a outcome within a aggressive advertising and marketing rolex replica sale plus the keen pricing policy. The brand marked a perfect spot for the pricing for those models. This manufacturer stretched in their marketplace share. The watches are currently sold over over 25 nations across the globe.