One Man Bland: Will Smith is the Last Man in NYC in “I Am Legend” 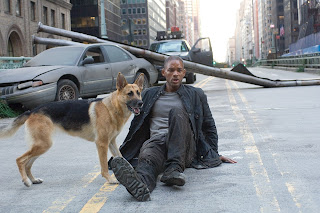 To many people New York City is an impressive sight: thousands of busy people coming and going, all those tall buildings and endless amounts of gigantic advertisements. But it’s even more impressive with no people around and weeds growing nearly as tall as the man-made structures around them. The production design of the science-fiction parable “I Am Legend” is the most notable part of an otherwise drab story of a man who survives the spread of a virus that turns people into daylight fearing CGI zombie-creatures.

I guess if you’re going to want to spend nearly an entire film alone with someone you could do a lot worse than Will Smith. I mean wouldn’t it suck if you had to watch Gilbert Gottfried walk around Manhattan all by himself? I shudder at the thought of it. Will Smith takes on the Tom Hanks Cast Away role as a man trying to survive on his own. Except in this film a terrible virus (which was supposed to be the cure for cancer) turns people into vampire-like monsters who feast on the flesh of the living. I guess the moral of the story is not to find a cure for cancer.

Will Smith is Robert Neville who is, by reasons I believe to be unexplained, is immune to this virus and he ends up being the last human being alive in Manhattan. After three years of surviving on his own with his trusty German Shepard, he still is trying to find a cure for this virus that spreads very quickly and makes people into raging lunatics. It basically turns people in a hybrid of the zombies from “28 Days Later” and the cave-dwelling humanoids from “The Descent.” (Certain parts also recalled “The Birds” and “War of the Worlds”) Of course, those films on the whole were far superior, but this film does have a few effective scares here and there. There is a suspenseful sequence set inside a dark building while Robert looks for his dog.

Films like this tend to lean towards some sort of political metaphor. I’m sure there is some kind of larger meaning behind it all, but basically what we have here is a simple story of humans being wiped out and one man struggling to survive. Will Smith is a good actor but I’m not so sure that this entire film is completely compelling in the way other films of this genre are. “28 Days Later” (and it’s terrific sequel) was so much more than a zombie film and “The Descent” wasn’t just about women trapped in a cave. They have something bigger to say about how society works, while “I Am Legend” seems more interesting in showing off elaborate special effects which by the way…

…suck major ass. The zombie people are completely unconvincing as effects. I spend most of the film trying to figure out why director Francis Lawrence approved the effects here. It’s obvious the film has a large budget and it showcases some impressive action sequences, but the zombies are only scary when they jump out at you accompanied by loud music on the soundtrack. The escaped zoo animals that run wild throughout the city (lions and deer) are also horrible CGI creations that had me scratching my head. With so many credible shots of a rundown Manhattan it amazed me that the other computer effects could be so ho hum.

The bottom line here is that this really is just a standard science fiction thriller that has a few scares and a good solo performance by Will Smith, but nothing more. I was intrigued by Smith’s character’s daily routine and I though his dog was impressively intelligent, as most movie dogs are, but other than those stunning shots of a bare NYC, this is one legend almost worth forgetting. GRADE: C+