She’s Having a Baby: Ellen Page is Knocked Up in the Hilariously Heartfelt “Juno” 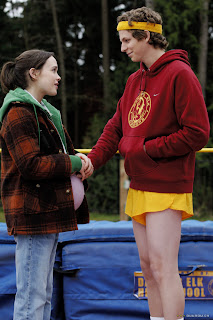 What is it with pregnant women in movies? First “Waitress” makes a big splash at Sundance, then the Judd Apatow hit “Knocked Up” was a summer smash, and now we have “Juno,” a cute tale of an acid-tongued teen girl who gets impregnated by her sweet best friend. Perhaps it’s the notion that women can be just as funny as men and while growing a human being inside them as well. Having said that “Juno” is probably the sweetest and most funny comedy of the year. You want to reach out and grab the movie. Yeah, it made me want to grasp onto the movie and never let go. You want to dive into the screen and hug ever character. You’ll want to hug your friend sitting next to you and even the creepy guy behind you. Or not.

“Juno” really is as good as it’s been hyped up to be. It’s been touted as this year’s “Little Miss Sunshine” and it’s every bit as good and every bit as funny as people say it is. Ellen Page is a revelation in the title role. As small teen Juno, she’s larger than life. She has a witty or sly comment for everything and yet she’s never repulsive or annoying. You just want to be her best friend. Page is Oscar-worthy here and she rivals one of my favorite comedic actresses Amy Adams. It’s amazing how playing an expecting mother can really be a breakout role.

Director Jason Bateman has taken first time scribe (and former stripper) Diablo Cody’s pitch perfect screenplay and concocted a freshly rewarding film about life, love and friendship that drips with splendid dialogue that is music to the ears. Page and her co-stars deliver every line with perfection. Take for instance Juno’s reply when a character asks her whether her parents are worried about her: “I'm already pregnant, so what other kind of shenanigans could I get into?” There’s not a missed note along the way.

Arrested Development’s Michael Cera (who also starred in “Superbad”) is the slightly geeky Paulie Bleeker. After a night of awkward intercourse, Juno realizes much to her dismay that she is in fact pregnant. She tells her accepting father (JK Simmons) and stepmother (Allison Janney) the not so splendid news. How refreshing to see a set of parents that don’t freak out when they find out she’s with child. They are concerned yes as any parent would be, but they are not the enemy. There is no enemy here; remember I said you want to hug every character.

Realizing that abortion isn’t exactly the way to go, Juno decides to go through with the pregnancy and find loving, adoptive parents. While looking through the penny saver with her friend, she comes across an uber-perfect couple Vanessa and Mark (played by Jennifer Garner and Jason Bateman). Vanessa is so ready to be a mother but Mark isn’t as sure about being a parent as Vanessa. Juno loves this couple and is willing to give her child to them. She quickly bonds with Mark, because we learn he’s really just a grown up teenager and Mark and Juno have a connection. They share tastes in movies and music. We learn right away that Mark’s favorite film is “The Wizard of Gore” and it’s immediately obvious that he may not be prime daddy material.

The film is a fun, lighthearted laugh fest. It has some extremely funny lines that you’ll be quoting even days after seeing the film. And its soundtrack is equally fun with many quirky songs that completely reflect the tone of the film and its characters. The movie never pulls at your heartstrings in a manipulative way and its not ashamed to cause a tear or too. This is one of the most warm, happy movies of the year. So just see it and hug it already. GRADE: A

Watch Game of Thrones Season 4 Episode 8 If
you're usually dropping things, you are likely to find it difficult
when you make an effort to learn how to execute magic tricks effectively.
"Everybody is struggling with identity in season three - What am I. Motivated by the murder, Robbs men want to take action.

"To an old TV Example, the redemption color TV, refrigerators, washing machines, air conditioners, water heaters, any of them are possible. Merchants considering expanding their payment options to include credit cards can save time, increase revenue, and satisfy their customer's payment needs by hiring a professional and experienced credit and debit processor. It is a phony citation that you can use to play a joke on someone.

Have a look at my homepage: Repo Software

Hey there I am so grateful I found your weblog, I really found you by mistake,
while I was researching on Aol for something else, Regardless I am here now and
would just like to say many thanks for a marvelous post and a all round entertaining blog (I also love the theme/design),
I don’t have time to read it all at the minute but I have book-marked it and also included your
RSS feeds, so when I have time I will be back to read a
great deal more, Please do keep up the superb b.