Mock ‘N Roll: Musician Biopics Get Their Due in “Walk Hard: The Dewey Cox Story” 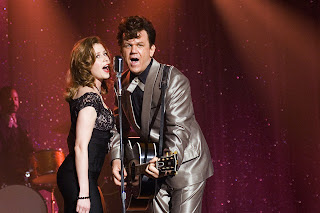 “In my dreams you're blowing me…Some kisses.” If you can laugh at the double entendre in this lyric found as part of the song “Let’s Duet” in the hilarious spoof “Walk Hard” you’ll be laughing the whole way through. Judd Apatow, who certain has had a great year having directed “Knocked Up” and producing “Superbad,” goes three for three by co-writing this funny send up of music biopics. Movies like Walk the Line, which tales the tale of the late Johnny Cash and Ray which features Ray Charles are given the “Airplane!” treatment. No stone is left unturn. They through ever gag at the screen, most of which actually stick. If you’ve gotten sick of the redundant pieces of crap like “Date Movie” and “Epic Movie” that have been masquerading as funny spoof films then “Walk Hard” is for you. It actually reaches the level of such classics as “The Naked Gun” and “Hot Shots!”

While it could have been called Biopic Movie, director Jake Kasdan (who also co-wrote) has rather decided to skip the standard “let’s-just-reenact-this-scene” way of making spoof movies. This is not a movie filled with scenes straight out of Walk Hard and Ray. They actually go beyond just recreating those scenes and actually create witty and funny situations. This film’s goal is to make you laugh and it succeeds admirably.

Over the past few years true life tales have taken a hold of motion pictures. I can’t remember the last time I saw a film that wasn’t based on a “true story.” But more specifically, the musical biopic has become a staple of cinema, especially in the past few years. And what’s so amazing is that it doesn’t matter whose story is being told; it’s basically the same story. A simpleton who dreams big gets the chance of a lifetime when they hit it big and become a musical phenomenon, but that’s not until recoiling into a dark period in which mind altering substances take over the performer’s life, only to be saved at the last minute and become a legend in the music industry. Phew! The story of Dewey Cox (played gamely by Golden Globe nominee John C. Reilly) plays out in the exact same way.

As a child, Dewey Cox was raised by loving but stubborn parents. After a tragedy that takes the life of his older brother, Dewey pours himself into his music. He becomes a hit sensation and sets off on a lifetime of sex, drugs and rock n roll. He marries his high school sweetheart Edith (played wonderfully by SNL cast member Kristin Wiig). They reproduced about 10 times and while Dewey is off making music she must stay home and watch their children. This is a marriage guaranteed to end badly. Of course Dewey meets a new love Darlene (The Office’s Jenna Fischer in the June Carter-type role). The two become a duet sensation. But then band member Sam (Tim Meadows) introduces Dewey to drug after drug which puts him in a downward spiral of darkness and despair, only to become a music legend in the end.

One of the most surprising aspects of “Walk Hard” are the actual songs written for the film. They are fun catchy songs that reflect the time they were written. Dewey Cox goes through many stages of music he goes from 50s crooner to 60s head tripper to 70s disco dancer to 80s pop star. He even has Bob Dylan and Jim Morrison phases. And if anything, see this film for its many cameos. Almost everyone from the Apatow clan makes an appearance somewhere. And even Eddie Vedder of Pearl Jam joins in on the fun.

You’re unlikely to find a film with a larger laugh per minute ratio than “Walk Hard.” It works beyond just being a comedic remake of movies like “Walk the Line” and “Ray.” This is movie is silly yes, but it’s actually intelligent. This is movie made by people who know about comedy and good filmmaking. It’s obvious everyone involved here had lots of fun and you will too. GRADE: B+

I'm grateful for the post. Really looking forward to reading more. Thank you for sharing.

As a Custom Application Development Company improvement organization, Appedology helps in forming organizations by coordinating methodology, inventiveness ,investigation ,specialized ability, and computerized promoting administrations, all given together. As a team with our customers, we transform thought into items, which we configure, create, and discharge ,to the market in such a way that adjusts business needs and client experience. we have assisted our customers with embracing the nimble standards across all business and units and have fabricated exceptionally complex yet adaptable and hearty versatile and web applications for them, which has furnished them with another force in their everyday business exercises

The magnificent website you have got here. It really worth surfing through, keep up the good work and thanks for sharing such an elucidates reads... get novelle hse past question papers all in pdf format