American Idol: Brad Pitt Stars in a Movie About “The Assassination of Jesse James By the Coward Robert Ford” 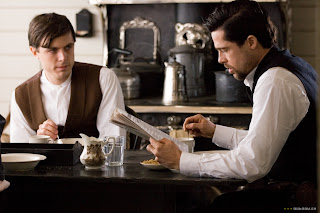 There are plenty of beautiful bad movies: movies that satisfy the eye but stupefy the brain. While “The Assassination of Jesse James By the Coward Robert Ford” by definition isn’t really a bad movie, there are far too many elements that threaten to make it an enjoyable. Your eyes will be amazed…if they can stay open. Headlined by a terrific performance from veteran Brad Pitt and an equally strong supporting one by Casey Affleck (who’s on a roll after Gone Baby Gone). The photography here is simply stunning, it crackles with beautiful textures, lights and darkness. There’s so much here that director Andrew Dominik could have cut out; (although you have to admire this auspicious and continually delayed project), it seems like an editor’s wet dream.

The movie starts out so strongly, that you can’t help but feel slightly disappointed when it muddles and meanders in the middle section. We’re introduced to Jesse James (Pitt) circa late 1800s as he rocks back and forth in his old rocking chair and the narrator gives us a little backstory. Then we’re slowly introduced to his gang of outlaws. There’s Jesse’s cousin Wood Hite (Jeremey Renner), Dick Liddil (Paul Schneider) Charley Ford (Sam Rockwell) and his brother Bob (Affleck). Then we have a terrifically exciting and technically masterful train robbery scene.

This is one of the best robbery scenes of recent memory. The suspense just completely builds in such a satisfying way. Jesse puts his ear to the train track and the scene goes completely dark until we see a faint light grow stronger in the distance. The camera remains motionless as the train comes forward and somehow the camera begins moving backwards with the train. I’m not sure how they did it but it was a pretty cool shot. The music, editing and camerawork all come together to put on a great cinematic show.

While the remaining two hours is still beautiful, I didn’t find much to care about when the film starts to focus more on Jesse’s gang than Jesse himself. Jesse was a celebrity back in the day, much like Pitt is now and I wish more was focused on Robert’s idolization of him. But the film’s last third is redeemed when the story focuses on Robert’s slight fixation. He emulates Jesse. We don’t really know if he wants him or if he wants to be him. Sometimes he seems so obsessed we’re waiting for him to strap Jesse down and take out his ankles with a sledgehammer. Of course, we all know what happens and it’s that passion that turns towards murder that is most fascinating.

The film’s cinematography by always reliable Roger Deakins (The Shawshank Redemption) is simply among the year’s best. The music is haunting and efficient. The costume and set design are, as far as I could tell, accurate and definitely helped you believe this was taking place in the late 1800s. All of the creative artists have come together and do beautiful work. All the elements seem to be in place, if only the story could have been more exciting. Perhaps, it’s because I’ve never found the Western genre to be that particularly interesting. In fact, I can’t even think of a Western that I’ve really sat entirely through (unless you count “Back to the Future III”).

And of course, the acting is great. Pitt gives another great performance (after his terrific turn in last year’s Babel). And this certainly has to be Casey Affleck’s year. He finally is praise worthy and you’d never know he was related to that guy who was in Pearl Harbor (although his directorial debut Gone Baby Gone is certainly one of the year’s best movies). The scenes with these two great actors work the best. Unfortunately Mary Louise Parker as Jesse’s wife doesn’t get very much to do except cry immensely when her husband is shot and killed (hope I didn’t spoil it for you) although she’s very good as well.

The fact is, if you’re a fan of the technical aspect of good filmmaking “Jesse James” has a lot to offer. The beautifully composed shots are just plain astonishing. I did feel slightly confused through out its midsection as to why the focus turned to Jesse’s gang. In the end, it could have been much worse, but at the same time, it could have been even better. GRADE: B-

This blog is so nice to me. I will continue to come here again and again. Visit my link as well.
Good luck