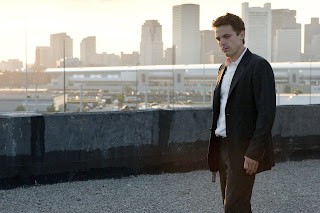 “The guy who was in Gigli and Armageddon?”

“Well it’s a Screenwriting Oscar, he wrote Good Will Hunting. It was a great script.”

“Oh yeah, I remember that, him and the Jason Bourne guy won. Yeah I guess I'll see it, I'm sure it has lots of swearing in it.”

I imagine this is a very typical conversation circulating the country in what must be one of the biggest surprises of the year. Ben Affleck has made a terrific movie: “Gone Baby Gone.” He co-wrote the film with Aaron Stockard (who according to imdb was Matt Damon’s assistant on The Talented Mr. Ripley) who based the script on the novel of the same name. The film is about a missing girl in Boston and the young private investigator who digs up some dirty dealings revolving around the child’s disappearance. This movie has so many great things in it I’ll try to be concise. But simply put, this is a terrifically and efficiently made film. Affleck shows complete confidence behind the camera. Good for him.

Let’s start with the terrifically well-written screenplay. It starts off with a seemingly normal and sad story of a mother who lost her daughter, but it’s soon discovered to be a lot more than that. Helene McCready’s (Amy Ryan who totally lets loose) young daughter has disappeared. It appears to be a typical missing child case. There are no thoughts of kidnapping at this point. Helene’s brother and sister-in-law want to hire PI Patrick (Ben’s little bro Casey) and his partner Angie (Michelle Monaghan) to widen the search. The little girl has been missing for a couple days and at this point any chance of finding her is slim. We see that Helene isn’t exactly Mom of the Year. She’s a drug addicted alcoholic who has a mouth like a dirty drug addicted alcoholic (Affleck & Stockard’s dialogue seems genuine and appropriately shocking). We don’t really sympathize with her, and although it doesn’t seem important now, it will be later on. We soon realize this is so much more than a story about a missing girl. As the story unravels, moral complexities are peeled away and characters’ true natures are revealed. We get a peek into this seedy lifestyle. And it’s simply fascinating. We delve deep into a corrupt society with dirty people who do bad things for several reasons. The raises an interesting question though: how can doing something “wrong” making something “right.”

If I was an ethics professor I’d show this film on day one. This film will spark conversations long after it’s over. As an audience we want the little girl found, but do we really want this crack addict mother reunited with this innocent child? To really say anything more about the plot would be to ruin the experience so I will go no further. At this point it’s up to you. This is a thoroughly morose and slightly depressing tale, but it's rewarding and well worth your time.

And like any film directed by an actor, it has terrific performances. The always dependable Morgan Freeman is superb in a pivotal role. And the fact that he’s such a lovable and unquestionably likable actor is vital for his role as the chief of the Boston police. Ed Harris adds another stunning supporting performance to his resume. I’m really amazed with the general casting on this film. I’m not really sure if many of these supporting actors and extras are really actors at all. Affleck and his DP John Toll have really captured the gritty underbelly of Boston in a way similarly to last year’s The Departed, although Gone Baby Gone has much more in common with Mystic River (also based on a Dennis Lehane novel) than that film.

Besides the ethics lesson, if there’s anything to be learned from this film it’s that Ben Affleck really deserves to be behind the camera instead of in front of it. You’ll gain a new found respect for the Beantown native. I’ve never really been too impressed with his staring roles but as a writer and director working on his home turf, he’s as comfortable telling this story as any one of us would be barbequing in our own backyard. GRADE: A
FUN FACT: While “Gone Baby Gone” is Ben Affleck’s feature film directorial debut, according to imdb, he did direct a short film called *taking deep breath* “I Killed My Lesbian Wife, Hung Her on a Meat Hook, and Now I Have a Three-Picture Deal at Disney.”

I'm not sure where you're getting your info, but good topic.
I needs to spend some time learning much more or understanding more.

Thanks for great info I was looking for this information for my mission.

Take a look at my web blog; amazon code generator ()

This is my first time visit at herе аnd i am actuaally impressed tօ read all at օne plаce.

It's actually a great and helpful piece of information. I am satisfied that you just shared this useful information for us.
Thanks for sharing.
cara menggugurkan kandungan