President’s Daze: “White House Down” is Really Dumb But at Least It’s Not Boring 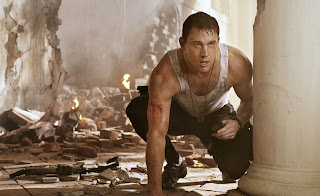 Is anyone else experiencing a serious case of White House déjà vu? The Gerard Butler action drama “Olympus Has Fallen” came out four months ago to mediocre reviews and to be honest, I thought it would be the lesser of the two films. “White House Down” has the guy who made "Independence Day" and "2012" behind it and stars the always likeable Jamie Foxx hot off “Django Unchained” and the recent sensation Channing Tatum hot off a hilarious cameo in “This is the End.” However, in a twist of M. Night Shyamalan proportions “White House Down” is actually the lesser of the two “Die Hard in the White House” action flicks to be released this year.


Channing Tatum is US Capitol police officer John Cale working under the Speaker of the House who longs to be part of the Secret Service protecting US President James Sawyer (Jamie Foxx). He’s divorced and has a young daughter who’s obsessed with politics. He’s one of those typical “absent fathers” in movies whose kids call them by their first names. He gets her a ticket to tour the White House on the same day he gets an interview for a Secret Service position. Moments there’s an exposition in the Capital building and soon after terrorists take over the White House. But they’re not the standard international terrorists we usually see in movies like this. In fact, once you actually find out who’s behind all this and why you may want to slap your forehead a few times. Cale’s daughter is one of the hostages and the film spends plenty of time putting the terrified young girl in harm’s way. How many times did this poor girl have a gun to her head? Oh but look, there’s the funny tour guide who cracks jokes and tells one of the bad guys carrying a machine gun to be careful with that priceless Ming vase. Meanwhile, Cale at first is undetected and he quickly joins up with the president and the two proceed to help take the White House back John McClane-style.


This movie is pretty dumb. It’s not dumb because the premise is unbelievable it’s dumb because of the choices Roland Emmerich decides are okay to be in his movie. Like why does John have a seemingly stupid and pointless conversation with a squirrel at the beginning of the film? Did he not deem that a stupid and unnecessary part of James Vanderbilt’s surprisingly shoddy screenplay? I could even forgive the fact that James Sawyer would never even remotely have a chance of being the President in real life because Jamie Foxx give it his all. He and Tatum work rather well together. Even Maggie Gyllenhaal escapes the movie with her otherwise successful career still intact. I can’t really divulge much about the motives of why these people would take over the White House, but it’s simply put the most preposterous and stupid reason ever! No doubt about it.


It’s inevitable that “White House Down” is going to be compared with “Olympus Has Fallen.” And that makes sense since they’re practically the same movie. Except for one big difference. While both films are hugely far-fetched, “White House Down” has a serious personality disorder. It’s not sure if it wants to be a straight up balls-to-the-wall action flick or a silly buddy action comedy. “Olympus Has Fallen” played its ridiculous premise completely straight and was therefore completely confident of its intended tone. “White House Down” wants to be serious drama – look there’s a young child in jeopardy! – but throws in too many moments of silly comic relief that just makes you realize just how dumb this thing is. And the more you try to forget how you’d rather be watching “Die Hard” or “Air Force One” the more you might actually enjoy it.


“White House Down” even at a runtime of over two hours is never really dull. It’s loaded with action and it even has a few genuine moments of suspense and even a surprise here and there. The actors are pretty solid here. They give it their all. It does eventually begin to wear out its welcome moving into the third act which includes nuclear missiles being launched at Air Force One of all targets. I was never really bored by “White House Down” (and it’s still more entertaining than “A Good Day to Die Hard”)but it has too many cheesy eye-rolling moments and can’t seem to decide if it wants to be a serious movie or a silly movie so it decides to be both – with borderline disastrous results.  But in the end I didn't hate it. GRADE: B-