Apocalypse Now: “This is the End” May Be the Best Comedy of the Year 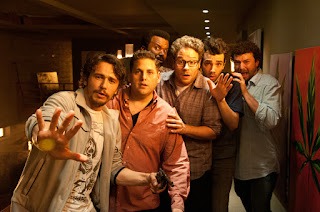 It’s all been leading up to this. Not long after “The 40 Year Old Virgin,” Seth Rogen made a splash back in 2007 when he starred in Knocked Up and co-wrote “Superbad.” Let’s thank Judd Apatow. And ever since then him and his writing partner Evan Goldberg have been cranking out really funny and irreverent films. Sure there have been some hiccups along the way (I never saw “The Watch;” nobody did). But never have they come up with something so spectacularly awesome as “This is the End.” It’s a project that could have easily failed miserably. Seth Rogen playing himself along with a slew of slack pack Hollywood actors set during an apocalyptic event? All set inside James Franco’s multimillion dollar bachelor pad? It has all the makings of self-congratulating masturbatory pretentiousness. But these guys are smart. And funny. Very very funny. And this film only works because audiences have spent the last six or so years getting to know the onscreen personalities of the actors in the movie.

Seth Rogen plays himself. Most people probably think of him in real life a schlubby guy who eats bad food and gets high a lot. That’s pretty much how he’s portrayed. He picks up his friend Jay Baruchel who starred in his own movie, you probably never saw “She’s Out of My League.” The guys are best friends, but Jay isn’t into the LA lifestyle and so he feels like an outcast amongst Seth’s other good friends Jonah Hill and James Franco.  They attend a party at Franco’s house with lots of famous people. Sure these aren’t old Hollywood stars like Tom Cruise or George Clooney. We’re talking those funny guys you see in movies that haven’t quite paid their dues just yet. Look, there’s Michael Cera! He’s sort of a douche and he keeps slapping Rihanna’s ass. Hey, it’s Daryl from The Office. His name is Craig Robertson. Speaking of The Office, it’s Mindy Kaling! Of course Jason Segal is there. Even Hermione herself Emma Watson is chilling. And the kid who played McLovin. It’s a “Superbad” reunion!

Things take a turn for the worse when Seth and Jay visit a convenient store to get some munchies. A powerful earthquake rips through the city and some people are beaming into the sky by streams of blue light. They head back to the party where a giant sink hole forms hilariously sending many of these actors to their deaths. Cera gets it the worst, having a street lamp pierce him through the chest while everyone watches on in horror. The only ones left are Seth, Jay, Craig, Jonah, and James. They have no idea what’s going on, but decide to barricade themselves in the house. They figure since they’re actors rescue is most likely imminent. And let’s not forget that Danny McBride has been passed out in the bathtub and has no clue what’s been going on. And so begins what essentially becomes a feature film version of Big Brother with celebrities set during the apocalypse. There are too many surprises and laughs to go into much depth, but anyone who finds any of these guys’ humor is going to love every minute of it.

The film is surprisingly witty and well-paced. Rogen and Goldberg make their directorial debut and it’s simply wonderful. Every scene has some kid of sidesplitting laugh or surprise. You never quite know where it’s going and the mystery about what’s actually happening out there is perfectly and slowly revealed. Each actor has a great time playing a caricature version of their real life persona. Jonah Hill seems rather stuck up and special; after all he’s been nominated for an Oscar. As has Franco, who keeps all sorts of props from his movies including the camera from “127 Hours” and  a prop gun from “Flyboys.”  McBride probably comes off as the worse after he threatens the groups food and water supply and even dirties up the house’s only adult entertainment magazine. The whole thing is such a deliciously meta exercise in wickedly funny comedy.

The screenplay hits all the right notes. Even when you think you know what’s going to happen it occurs in a completely different way. The name Channing Tatum is mentioned, you think: well he has to turn up somewhere right? But not nearly where you’d expect. The humor here, with all of Rogen’s work is completely juvenile. There are even scenes of the actors drinking their own urine to survive, but it’s all in the name of hilarious comedy. And the violence is so over the top (we get to see the point of view of a severed head) that all you can do is laugh.

“This is the End” is so subversive and irreverent I’m amazed any studio had the balls to green light it. But why wouldn’t they? Rogen himself has proven that his brand of childish humor is something that really sells today. And it does because it connects with major audiences. The film is so fresh and funny the actors make it seem easy. It feels like a bunch of friends who decided to make a movie by playing themselves. But it looks anything but simple. There are some truly astounding special effects at work here especially for a comedy. And while the actors are basically playing themselves, they all give terrific performances. The relationship between Seth and Jay is disturbingly well fleshed out and as certain things are revealed you realize how much movie stars are just like you and me. It even has a, dare I say, poignant message.

“This is the End” is a simply astounding film from beginning to end. You’ll be in awe at how good it really is. I definitely am. If you’re a fan of any of these guys or of irreverent, ridiculous, and even offensive humor you’ll love it. It just may be the funniest movie of the year.  GRADE: A
Posted by Chris at 8:57 PM

To show the movement and operation of sophisticated machinery metal aesthetic 2018 replica watches full hollow self 2018 replica watches gives full hollow gentleman temperament and Zoran watch confident demeanor, elegant ladies rolex replica and a different kind of charm. Has more than three days power reserve of breitling replica sale movement, so the appearance of the classic atmosphere of freedom of spirit automatic mechanical watch is more durable and reliable, so watch at idle weekend is still running. Tour in 2018 also starting a new series of replica watches uk field double calendar, which is mounted on the same series of 2018 replica watches independent movement, also has a power reserve of more than three days, is a double calendar display the sweep of the watch.