There Goes the Neighborhood: Thou Shalt Not Kill Unless It’s During “The Purge” 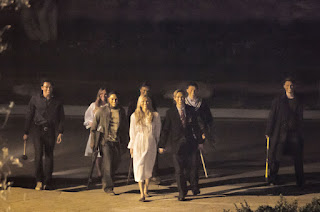 If the filmmakers behind “The Purge” really had something important to say, they wouldn’t have made a horror-thriller. Genre filmmaking, while not impossible to get a message across, isn’t really the best outlet for a “message movie.” And that’s why you’re better off watching “The Purge” for what it is – a creepy chiller with a fascinatingly audacious premise than the important morality play it might have hoped to be. The film takes place in the year 2022 and it opens just hours before the “Annual Purge:” a twelve hour period, sanctioned by the American Government, in which all violent crime, including murder, is completely legal. Now, not every crime is legal; one couldn’t assassinate the President or drop a nuclear bomb. But you know that ex-spouse you hate? Or that jerk boss that you wish was dead? Or the teacher that flunked you? It’s a deliciously clever concept that writer/director James DeMonaco has crafted into an eerie home invasion plot. It’s nowhere near a perfect film, but it’s one that so ingenious you’re willing to forgive its flaws. The whole thing feels like “The Strangers” meets “Panic Room” filtered through “The Hunger Games.”


Ethan Hawke plays James Sandin. He’s a well off guy with a beautiful wife named Mary (Lena Headey) and a teenage daughter and young son. He sells high tech security systems so that the rich folk who can afford them can barricade themselves in their houses during the Purge and throw fancy parties. Of course, it seems that those who bought his systems look at him with envious eyes. While many lessons will be learned on this particularly Purge evening, the important thing to know is that when murder is completely legal, anyone could be willing to kill. But I digress. James and Mary finish a nice dinner with their family and then lock themselves into their house ready to wait out the next twelve hours.


It appears that with this Purge comes many “benefits:” the inherently violent nature of the human race has slowed. There are hardly any violent crimes throughout the year and therefore the economy is booming and employment rates are very high. But of course as the saying goes it’s really the survival of the fittest. A group of random masked prepsters hunt down homeless people, for instance, and one injured guy is let into the Sandin home by James’ young son Charlie. Now these masked creepers, one of which is credited as “Polite Stranger,” who are using their legal right to purge, insist that the family let this guy go, so they can kill him (which they technically have every right to do) or they’ll find their way inside the house and kill the entire family.


I can’t really reveal too much without spoiling the fun. Some people will be able to see certain plot elements before they occur while others will be so caught up in what’s going on that those won’t matter. Certain situations the characters find themselves in get resolved a little too easily at times but it’s no less intense. Some people will see certainly plot developments before they happen or argue with some characters’ decision making. If predictability and character motivation are the film’s biggest flaws those are not necessarily a bad thing. The film is also fiendishly ingenious. I loved learning all the little bits about how the purge was created. Even the simplest thing, like people who plant blue flowers on their lawn are supporters of the Purge, were pretty interesting. It’s fascinating to see people who are so accustomed to feeling safe during such a violent time become violent themselves in order to survive. And I loved how the film ended so much I actually wished then and there for a sequel to be made.


“The Purge” is a great little movie. It’s low budget but never cheap looking and whatever flaws creep up it makes up for with sheer creepiness. I jumped at all the right points. Sure it basically creates more questions than it answers and characters do stupid things, but what do you expect from this genre? It’s a stylish and entertaining thriller from beginning to end; I really enjoyed this one.  GRADE: B+