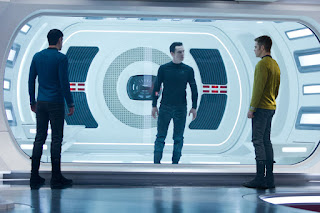 Critic Owen Gleiberman said it best, "It's has everything you could want in a Star Trek movie." And that's true because it's actually nothing like a Star Trek movie. Those old movies from way back in the 1980s were slow, cheesy, and underwhelming. This sequel to the hit 2009 reboot/prequel is anything but. It's intense, exciting, thrilling, and most importantly relevant to today. It is in fact, the second movie to come out this summer to have a subplot involving terrorism. It's a sad fact that it's something we have to deal with in today's world, but it makes sense that it's weaved into our escapist entertainment. It makes the movies more relevant and a reflection of the time. As a non-Star Trek fan I'm sure the original films were a reflection of their times, but times they are a-changing. “Star Trek Into Darkness” is an outstandingly fun and awesomely realized action adventure with thrilling set pieces and dazzling visuals. If the first movie was “Star Trek Begins,” this new film is certainly “The Dark Knight” level entertainment.

You don’t have to be a big fan, nor have to of seen the last Star Trek movie to enjoy “Into Darkness” though it certainly doesn’t hurt. You get a great sense of what director JJ Abrams was trying to accomplish with his Star Trek visions. He wants to take you on a super fun and incredibly thrilling adventure. He’s set up younger, dare I say cooler, versions of the trademark Star Trek characters including the charming yet cocky Captain James T. Kirk (Chris Pine), the half human-half Vulcan no-nonsense First Officer Spock (Zachary Quinto), the beautiful communications officer Uhura (Zoe Saldana), Russian navigator Chekov (Anton Yelchin), chief medical officer Dr. McCoy (Karl Urban), engineer Scotty (Simon Pegg), and helmsman Sulu (John Cho). It’s a great cast that works immensely well together. The villain this time around is played by British actor Benedict Cumberbatch playing a guy named John Harrison. The plot is set into motion when Harrison perpetrates a bombing in London and eventually attacks a meeting at the Starfleet Command killing several important officers. The USS Enterprise is then deployed to find Harrison, who’s hiding out in Klingon territory, where he’s actually revealed to be a genetically enhanced human with a rather familiar name. Whether hardcore Star Trek fans will like this development I’m not quite sure.

Screenwriters Roberto Orci, Alex Kurtzman, and Damon Lindelof have crafted a wonderful story around these characters who interact so well with each other. Scotty at first refuses to partake in the mission because he only foresees disaster. And besides, the Enterprise is an exploratory vessel, not a warship. He’s quickly replaced by Chekov, but becomes instrumental later in the film. Abrams, who has publically declared he’s not really that much of a Star Trek fan in the first place, has opted for more frenzied action than the slow-moving drama most are accustomed to in these movies. It actually works much better as he explores the type of fun action and effects that can actually be pulled off with these terrific characters and modern effects. Kirk and Spock ever the best friends who never quite seem to get along, are wonderfully realized by Pine and Quinto. You could give them their own sitcom and it would be completely watchable. And Abrams, who’s always being influenced by the films of Steven Spielberg, even stages some great Spielbergian moments including an instantly memorable “Raiders” style opening sequence and an intense chase sequence in the final act that was something out of “Minority Report.”

The film’s production values are unsurprisingly top notch. The effects are simply astounding. There is simply no room for the cheese factor that marred the original films. The cinematography is beautiful, lens flares and all. The movie which was post-converted into 3D, doesn’t really need the extra dimension, but it doesn’t hinder the experience. However, the bigger the screen the better.

“Star Trek Into Darkness” is a completely enjoyable experience for anyone who loves big fun action spectacles. You don’t need to be a Star Trek fan to enjoy the ride; in fact, you’re most likely better off not being a Star Trek fan to get the most out of the experience. I simply cannot wait to see what they have in store for the third installment.  GRADE: A-
Posted by Chris at 8:35 PM