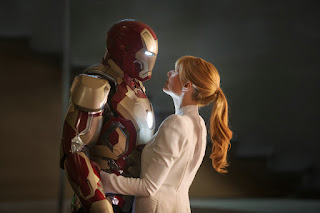 Great movies are always a product of their time. And Marvel’s “Iron Man 3” is no exception. It’s an odd idea, to be frank, to have a realistic terrorist as your comic book superhero movie’s main villain but that’s what “Iron Man 3” gives us. And what a villain he is. But great movies also have tricks up their sleeves. And so does “Iron Man 3.” Robert Downey Jr.’s fourth time in the flying Iron Man suit (counting last year’s Avengers movie if you’re keeping track) might just be his best yet. If you’re a diehard fan of the comic that may be up for debate, but as someone who’s never even glanced an Iron Man comic I can say I was particularly thrilled with this third installment; it certainly rivals the terrific first film, and is spades better than the somewhat forgettable second film.


There’s a new director in town and his name is Shane Black. His stamp on the third Iron Man film (he takes the helm from actor/director Jon Favreau) is an admittedly noticeable change in tone and feel. And that’s ok. The film begins with Downey’s voiceover as Tony Stark. We get a glimpse into Tony’s pre-Iron Man days and we’re introduced to a nerdy Guy Pearce as a scientist looking for Stark Industry’s financial support. Stark turns the guy down and you can bet that this won’t be the last time Tony has to deal with him. In the present day Tony is dealing with some post-traumatic stress from the events in The Avengers movie. His relationship with his former assistant Pepper Potts (Gwyneth Paltrow in arguably her best role ever) has been strained because he spends so much time in his man Iron Man suits. He’s now even calibrated them to fly over to him, in pieces, on command. And it doesn’t help that an evil terrorist named The Mandarin (Ben Kingsley in, at least, a Golden Globe worthy performance) keeps causing chaos by setting off bombs and baffling the authorities.


The first thing you’ll notice right away in this entry is the admittedly darker tone.  And it’s inevitable that in these darker times we’re living in it’s going to be reflected in the movies. But the screenwriters including Black and Drew Pearce have something so cleverly deceptive and fun up their sleeves I simply cannot spoil it. The twist might likely anger longtime fans but fan boys are very hard to please these days unless the film is directed or written by Joss Whedon. It’s rather difficult with literally superhero film after superhero film (and there seems be one released every other month these days) to have something fresh and new but that’s definitely what we get with Iron Man 3. Even with so many Marvel films released, it just feels so different.


Black, whose claim to fame is the cult crime comedy “Kiss Kiss Bang Bang” and writing “Lethal Weapon,” stages some truly magnificent action sequences. The attack on Stark’s Malibu mansion is so wonderfully realized it gave me chills. Another sequence involving a midair attack on Air Force One is just as breathtakingly amazing as it is in the film’s trailer. But Black succeeds in the movie’s quieter, character-driven moments including a subplot involving Stark’s relationship with a young boy named Harley (Ty Simpkins) that could have easily become corny or melodramatic, or even completely unnecessary, but grounded the film and gave it a nice touch of humanity and even some touching humor.  The choice to set the film around Christmas seems odd for an early May release but somehow that works too. Stark’s relationship with his pal Colonel James Rhodes (Don Cheadle) is great too. And Downey was simply born to play this role and he’s never been better.


The film has everything you could want in a big summer action movie and the best part is it’s not dumb or clunky. While it’s the third in a popular series it remains rather grounded and isn’t afraid to take big chances, some that will in fact make you question whether there could be a part 4 and 5. I couldn’t enjoy Iron Man 3 more; the music, sound, images, actors, and effects are all top notch. The summer movie season now has a lot to live up to.  GRADE: A-
Posted by Chris at 6:43 PM