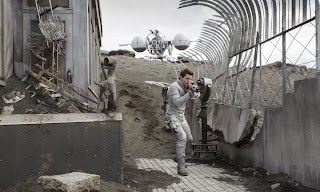 Here comes “Oblivion” finally an original science-fiction film that isn’t a sequel or based on anything. Well it’s based on a comic book, but that hasn’t been published so you nor I have had an opportunity to have read it. Of course my use of “original” might be skewered depending on how well versed you are in the science-fiction genre. As I sat in awe at the wonderful visuals being projected onto the screen I couldn’t help but not think of one other past science-fiction film that Oblivion attempted to reference or borrow from. I’ve seen plenty of science fiction films, but for some reason I got so lost in the film that I failed to realize just how much it’s been influenced by previous works. That is something that could either make or break the experience for you. That, and whether Tom Cruise’s nearly bat-shit crazy off screen antics over the last decade have made you dismiss the megawatt star.


“Obvlivion” as you’ve most likely seen from the trailers is set in a post-apoalyptic future in which aliens have decimated the planet. The humans have won the war, but the planet is no longer livable. Instead, the surviving humans are living on one of Saturn’s moon’s and Jack (Tom Cruise) and Victoria (Andrea Riseborough) are tasked with gathering Earth’s last remaining resources before joining the rest of humanity. Robotic drones help search and seek any leftover “alien” life forms remaining.


Of course that’s really just the premise, but what’s really the story here? Well, Jack seems to have flashes of his previous life. He sees a woman who appears to be his girlfriend or wife. During one of his scouting missions he’s sees what appears to be a part of a damaged spacecraft land and when he investigates the woman appears to be familiar. This begins the setup for the film’s second, and admittedly weaker, half in which not everything is as it appears to be. And that’s usually the case in movies like this. To say anymore would either ruin the fun or if you’re one who finds this all familiar, may even deter you from even paying money to see the film.


The film was worth the admission price for several reasons, however. The film has such stunning production value you wonder why this isn’t being distributed as a midsummer tent pole release. Of course, there’s no brand recognition here, so that most likely limits its mass appeal, which is a shame because director Joseph Kosinski has created such a fascinating world –with both practical and well-done visual effects. This isn’t the first post-apocalyptic film ever made at all, but the look and feel are simply wondrous. Too often we movies about aliens invading and attacking, and here we finally get to see a movie that takes place in the aftermath. The “now what?” scenario. The terrific music score from M83, a French electronic brand, is equal parts bombastic and subtle. I totally dug it.


I can’t say I really saw the film’s final act coming, as most of it sort of puzzled me. It has one of those, “nothing is what it seems” ending and gleefully pulls the rug out from under us. It doesn’t necessarily have a Sixth Sense level twist as much as it plays with what we thought we had been seeing for the previous two hours. You’ll either hate it or love it, but either way you see things you can’t deny the film’s ambition and scope – certainly felt more rewarded than cheated. Many will dismiss the film as a clone of previous sci-fi adventures… but after you see the film perhaps you’ll think that was the point in the first place?  GRADE: B+
Posted by Chris at 1:56 PM

Everyone wants to enjoy the gorgeous weather, but finding the right
source of entertainment and ideal outdoor games for a party
can be difficult. A baseball Family Guy The Quest for
Stuff Hack is a casual event so you can wear any casual clothes from your closet, but the keyword here is "layering. This is useful when trying to get a faster time in the level.