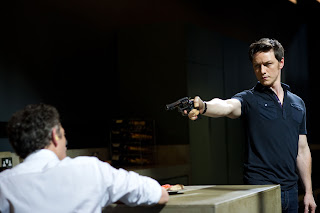 “Trance” is a difficult film to describe. And it seems even more difficult to actually put together. It’s a movie that only someone like Danny Boyle could put on the big screen. It’s full of flashy colors and hyper-editing and loud, electronic music and mind-bending images and enough twists and surprise revelations to fill three movies. You’re most likely to either hate it or love it. I definitely fell more towards the love it side because you simply have to admire someone for even attempting to make a crazy movie like this even remotely cohesive.


The story is simple enough: James McAvoy plays Simon, who works at a British auction house. He follows standard procedures when a team of art thieves tries to rip the place off. He tries to stash the painting, but gets a knock on the head leaving him with memory loss. It turns out Simon was actually in on the job and attempts hypnotherapy as a way to unlock his mind and remember where he put the valuable painting. Simple enough right? What we end up with is some sort of Inception, Spellbound, Eternal Sunshine of the Spotless Mind mind-warp thriller with some decidedly Cronenbergian touches (a head half blown off that still manages to talk) that only Boyle could pull off. Just when you think you have things kind of figured out you the film reveals more and more until by the film’s end you never actually knew anything that was really going on.


The film’s screenwriters Joe Ahearne and John Hodge purposely withhold certain character and plot elements on purpose. That way you’re instantly identify with Simon, who doesn’t quite know what’s going on. He begins seeing hypnotherapist Dr. Elizabeth Lamb (Rosario Dawson in a fascinating role) and begins to fall for her. But Elizabeth in turn begins to fall for Franck (Vincent Cassel, who seems, at first to be reprising his Black Swan role) Simon’s cohort who is desperate to find that painting. At first you’re not exactly sure how these relationships really work but you learn much more than you’re initially give at the film’s beginning, and certain characters aren’t exactly what they seem.


Whether or not you get the full plot from a single viewing is up to how much you want to invest in what’s going on. Boyle gives you just enough of what you need to not be totally confused, but luckily he provides some much needed expository dialogue near the film’s end which fills in some of the gaps. And all of this is wrapped up in a nicely kinetic and colorful package (love DP Anthony Dod Mantle’s candy colored digital palate) that hardly stops for a moment’s rest. The film has a relentless pace, and is never once boring. Thrillers of the mind can either be fascinating or a slog. This one is certainly spellbinding, if not particularly a must-see for everyone. Those in the mood for a bit of a mind flip will certainly get a kick out of this.  GRADE: B+
Posted by Chris at 6:14 PM

Greetings from Florida! I'm bored at work so I decided to browse your blog on my iphone
during lunch break. I love the information you provide here
and can't wait to take a look when I get home. I'm amazed at how fast your blog loaded on my mobile
.. I'm not even using WIFI, just 3G .. Anyhow, wonderful site!

Fantastic post but I was wanting to know if you could write a litte
more on this topic? I'd be very grateful if you could elaborate a
little bit more. Thanks!

Hey this is kinda of off topic but I was wanting to know if blogs use WYSIWYG editors or if you have
to manually code with HTML. I'm starting a blog soon but have no coding
knowledge so I wanted to get guidance from someone with experience.
Any help would be enormously appreciated!