The Tree of Strife: “Evil Dead” Update Has Blood & Gore But Not Much Else 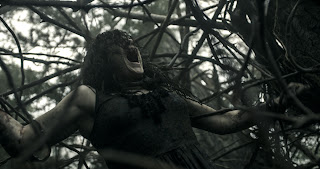 There’s nothing particularly outstanding about the new Evil Dead, but there’s nothing particularly horrible about it either. Your enjoyment of it will be dependent on several factors including how much you like the 1981 low budget original directed by Sam Raimi and how much of a tolerance you have for gobs and gobs and gobs of gore. Like, a lot of gore. Like, it literally rains blood in this movie. This new vision from first time feature filmmaker Fede Alvarez (who is this guy? I dunno) pays homage to the original while updating and changing certain story elements, much like most modern horror remakes. No one is certain to cry afoul at the changes made, though the original’s main beloved character Ash (portrayed by proud C-lister Bruce Campbell) is nowhere to be seen. But the basic elements – those spooky flying shots through the woods, the tree rape, the demon chick being locked underneath the floor, and lots of bloody effects – are all accounted for. Like most of these films, it just has very little reason to exist – and I’m surprised it does what with that supposedly clever horror-comedy “The Cabin in the Woods,” which shamelessly mocked this type of movie, released nearly a year ago to the day – though for fans of graphic violence it offers lots of it and then some.


In the original cult classic, a bunch of college kids go to a cabin in the woods, read from a book they find in the basement, and release evil spirits who proceed to possess and kill off said college kids. This more or less happens here, except the setup is a tad different. Mia (Jane Levy) is attempting a cold turkey drug detox weekend with the help of her brother David (Shiloh Fernandez), his girlfriend Natalie (Elizabeth Blackmore), and their friends Eric (Lou Taylor Pucci) and Olivia (Jessica Lucas). It is in fact Mia who is the first to show signs of being possessed by the “evil dead” after Eric finds a strange, ancient-looking book with strange drawings and reads from it. Of course, they think she’s just going through major withdrawal. It gets rather intense, however, when Mia pukes chunky blood all over Olivia and then she begins to cut her face off with a broken mirror. They all begin to become either possessed or killed off in increasingly disturbing ways, which tend to happen in movies like this. So no real surprises there.


However, and horror fans take note, this new “Evil Dead” is probably one of the goriest R-rated movies I have ever seen. And I have seen a lot. I don’t know how in the world the ratings board gave them an R rating but it’s rather surprising (not that I’m complaining). I just can’t even imagine bringing a kid to see this movie. And the main reason? It seriously lacks the overwhelming camp value and humor of the original movie. The film has a much darker and serious tone which makes the violence that more disturbing and shocking. There are moments where the violence is so grotesque you laugh out of sheer uncomfortableness.


Most fans will be saddened to find out that there’s no real Ash character equivalent here. It’s obvious that David is the “main character” but Fernandez is rather bland in the lead role. David and Mia are siblings dealing with the recent death of their committed mother, which adds drama and depth to the proceedings, but the actors don’t do much with it. I enjoyed the Eric character who could have easily just been the “obnoxious guy” but he definitely stood out, which isn’t that difficult when you’re surrounded by four other characters with no real personalities or character traits.


Lastly, without saying too much, the film contains a sort of false ending, and once the true ending begins, after much consistent groaning by the theater’s audience up until then, the film kicks into high gear and it doesn’t let up for minute. It’s certainly a welcomed surprise in a film that, offered very little surprises - and scares - to begin with. Overall, I’m sure most gorehounds will enjoy the film, and many of its well-done practical effects, while others are certainly advised to steer clear of this one.  GRADE: B
Posted by Chris at 11:26 PM