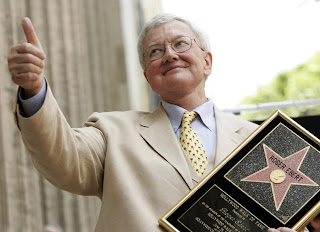 The film world was saddened to hear of the passing of Roger Ebert, one of the best and the most well-known film critics of all time – and the first to ever receive a Pulitzer Prize for film criticism. As someone who loves movies and writing about them, he inspired me, and I was therefore particularly saddened by this news. I had just read Ebert’s most recent blog post about how his cancer had returned but he “wasn’t going away” - it almost feels like he was actually saying his goodbyes, knowing full well that he was going to be leaving us - even at 70 years of age - way too early. To think there will be no more Roger Ebert reviews to read upsets me, but there are hundreds of terrific reviews that will be with us until the end of time. I didn’t always agree with his opinions, (2 stars for War of the Worlds and The Devil Wears Prada?? Oh please!) but he was one of the few professional film critics whose reviews I read consistently. It was sad enough when Ebert left his syndicated TV show after his first round of health troubles but to have no more printed reviews leaves me a little empty inside. Ebert wasn’t only a big movie fan and phenomenal critic; he was a likable and extremely well-educated and knowledgeable person. Roger wasn’t just a journalist; he was a great human being. And that counts for something in this world. He’s gone but not forgotten. As a particular fan of reading film reviews, I leave you with ten great scathing Ebert reviews of movies he simply hated, hated, hated. Negative movie reviews are a showcase for a great writer’s talent – and sense of humor. Thumbs up to you Ebert, wherever you may be.

Baby's Day Out
"...the audience produced an audible coo the first time they saw Bink on the screen. The more they like him, unfortunately, the less they're likely to enjoy him crawling along a ledge."

Beethoven's 2nd
"Some dogs are very clever. But when Beethoven came back with a box of popcorn for Missy, I realized these were not ordinary dogs but two of amazing intelligence, and when it was revealed that Missy got pregnant later that night, I found myself asking if they'd never heard of taking precautions."

The Blue Lagoon
"...this isn't a realistic movie. It's a wildly idealized romance, in which the kids live in a hut that looks like a Club Med honeymoon cottage, while restless natives commit human sacrifice on the other side of the island."

Clifford
"It's not bad in any usual way. It's bad in a new way all its own. There is something extraterrestrial about it, as if it's based on the sense of humor of an alien race with a completely different relationship to the physical universe. The movie is so odd, it's almost worth seeing just because we'll never see anything like it again. I hope."

Deuce Bigalow: European Gigolo
"As chance would have it, I have won the Pulitzer Prize, and so I am qualified. Speaking in my official capacity as a Pulitzer Prize winner, Mr. Schneider, your movie sucks."

The Human Centipede (First Sequence)
"I am required to award stars to movies I review. This time, I refuse to do it. The star rating system is unsuited to this film. Is the movie good? Is it bad? Does it matter? It is what it is and occupies a world where the stars don't shine."

Ben and McKinley
Achieve their fame
As campers whose love dare not speak its name."
Posted by Chris at 8:20 PM