Bringing Down the House: “Olympus Has Fallen” is Thrilling Preposterousness 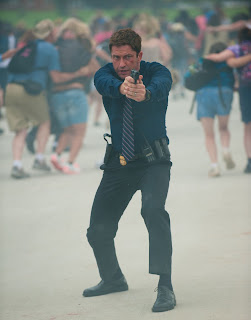 What do the movie “Antz,” “Dante’s Peak,” and “Deep Impact” have in common? They all had to compete with a similarly themed movie released a couple months later.  This year brings us two White House hostage movies. The first being this month’s “Olympus Has Fallen” and yet another one is due in June (that would be Roland Emmerich’s “White House Down”). “Olympus” is the first one up to bat and as ridiculous of a movie it is, it’s certainly extremely entertaining. I have a feeling it’s destined to be the lesser of the two films, but with nothing else to compare it to at the moment it certainly is thrilling even if it features one of the most preposterous plots ever committed to celluloid. It’s essentially “Die Hard” in the White House and it luckily has washed away the pitifully stains previously left by the fifth “Die Hard” film released in February. This is what that film could of and should have been. It’s a little rough around the edges but it works in a purely turn your brain off type of way.

Gerard Butler plays Secret Service agent Mike Banning. He’s escorting President Benjamin Asher (Aaron Eckhart) and his family when tragic accident occurs, leaving the First Lady (Ashley Judd) dead. Flash forward over a year later, and Banning has retired from his Secret Service job. Cue the Korean terrorists who manage to shoot up half of Washington DC and take over the entire White House. I won’t go into further details about how this all happens but it’s certainly thrilling… and rather scary as well. Not so much that something so extreme could happen, but living in a post 9/11 world adds greatly to the terror these types of movies can depict. Somehow Banning manages to get into the White House undetected and must find a way to rescue the President and some of his staff members who are being held hostage in a fortified underground bunker. One of those staff members is Secretary of Defense Ruth McMillan played wonderfully by Melissa Leo. Of course, the President is a tough guy, who is seen boxing in the opening scene. We’re not so much fearful for his life as we are about what the terrorists can do once they torture each hostage into giving up their personal nuke codes.

Director Antoine Fuqua (“Training Day,” “Shooter”) has staged pretty well orchestrated action sequences. The movie has a lower budgeted feel, but never feels or looks cheap. I can forgive the film for its lack of glossy Michael Bay approved shots since the movie doesn’t wallow in cheesy melodramatics with only a spare hint of “USA ALL THE WAY” patriotism. But what movie about terrorism in the USA doesn’t have that patriotism pull in this day and age? And the movie is well cast. Butler makes a wonderful action hero as evidenced in past movies like 300, and he’s likable and vulnerable enough that we care about him. The movie is briskly paced and hardly lets up for a moment.

If the film’s lack of a credible premise is its worst trait then what we’re left with is a purely entertaining piece of action filmmaking. It features fine suspense, performances, and action set pieces. It doesn’t go overboard with its patriotism, though it’s present. And think, if “A Good Day to Die Hard” was one of the worst action films of recent memory, this “Die Hard” wannabe can be that bad right? It’s possible the next White House hostage movie could be even better; if that’s the case this is a good year (or bad year?) for 1600 Pennsylvania Avenue. GRADE: B+
Posted by Chris at 3:00 PM

I absolutely love your blog.. Great colors & theme.
Did you develop this web site yourself? Please reply back as
I'm wanting to create my very own website and want to learn where you got this from or
just what the theme is called. Appreciate it!