Here Comes the Broom: The Stunning “Oz the Great and Powerful” Has a Heart and Brain 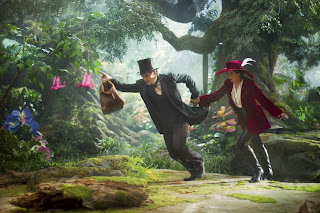 “The Wizard of Oz” is considered one of the greatest films of all time. You know it and I know it. Therefore it takes a little courage to attempt to top it. “Oz: The Great and Powerful” certainly doesn’t, and it doesn’t strive to, but as long as you look at it on its own merits as a loving tribute, you can find plenty to enjoy here. Since Hollywood is into fairy tales and whatnot, why not resurrect a property that has some truly wide audience appeal? It’s certainly what Disney does best – and often. They were smart to get someone with tremendous visual flair like director Sam Raimi who has come so far from his days of directing a low budget horror film in which a tree rapes a woman – which gets its own new vision next month. The director’s trademark visual touches are there which add greatly to this new vision of Oz.

The film is a visual wonder. The 3D effects work great. The movie even begins like the original by starting out in black and white (and even a full frame aspect ratio). We’re introduced to a young version of the great wizard named Oz (James Franco) who’s really just a sleazy magician working at fairs in Kansas. He womanizes and cares about making money above all else – though he dreams of being a great man. Since this is how this character is written, Franco is perfectly cast in my opinion. And it’s really a perfect characterization since we know from “The Wizard of Oz,” that the great and powerful wizard is nothing but a liar. Oz is quickly whisked away in his hot air balloon during a tornado to the Technicolor (and extra widescreen) land of Oz, where he meets up with Theodora (Mila Kunis) who explains to him – and us- about Oz and what’s been going on there. Her sister Evanora (Rachel Weisz) explain a prophecy regarding a powerful wizard becoming the King of Oz by defeating the evil Wicked Witch. They think he has real magic powers and he doesn’t tell them the truth.

Here’s where things begin to get tricky. There’s a slight twist in who is actually the Wicked Witch of the West in this film. The trailers don’t want you to know, and it’s more fun not knowing going into it. But all I can say about the actress who plays her is that she’s not very well cast as I never believed her as being very mean or wicked. She tries her best, but someone with a deeper, scarier voice could have worked wonders. I never was actually very afraid of her as a villain and perhaps that’s because I’m an adult, but there’s something sill creepy and terrifying about Margaret Hamilton’s portrayal from the 1939 original.  I’m willing to let this stuff slide however, since the film is such a strong visual wonder and it features some truly great supporting characters.

Like any great story told in the land of Oz, there are sidekicks that accompany the main character, and this new film is no exception. Oz meets a young china girl made of porcelain, who is lovingly sweet natured, but has a rather humorous darkness to her as well. She’s excellently voiced by Joey King and wonderfully designed by the amazing visual effects artists. And then there’s Zach Braff voicing a nice flying monkey named Finley (like witches there are apparently good ones and bad ones) who feels indebted to Oz after he saves the little simian’s life. He’s a cute little fella, and has some rather amusing lines. And then there are all other familiarities like lions, yellow brick roads, Munchkins and scarecrows – which all culminate in a battle for the throne of Oz – in gloriously conceived 3D no less.

Sure I had some reservations about the performance of the Wicked Witch and while Franco seems an odd choice as the Wizard of Oz he’s actually pretty perfectly cast. He’s unlikable when he’s supposed to be and likable when he’s required to be. Raimi has made a wonderful film – with enough scary moments to remind us all how traumatizing the old movie was when we were little – that is not nearly as bizarre and ill-conceived as Tim Burton’s Alice in Wonderland (a film that, as reviled as it is, I don’t actually dislike that much) which it has drawn the most comparisons to. After all, this CGI wonderland of Oz even features a great Danny Elfman score and fun Burton-like opening title sequence. “Oz: The Great and Powerful” is not a film that even intends on toping the original classic, but it’s a fun, harmless prequel that has enough visual stimulation and, more importantly, enough heart and brains to be worth any movie fan’s time.  GRADE: B+
Posted by Chris at 10:25 PM

Crafted of 316L stainless steel, the case, bezel and the replica watches sale bracelet have a subtle gleam that doesn’t die even under dim lights. The rolex replica sale brings an added touch of elegance and strength that is in accord both with fake breitling formals and semi-casuals. It is a timepiece that dazzles with almost every outfit and a must if you want to enhance your corporate sense of style. The dial of the fake rolex sale is cut in a circle at the middle, exhibiting the rolex replica classic three-hands, 20-jewel automatic calibre ST-90050 based on the calibre Hangzhou 2189. Around the rolex replica uk periphery of the cut-out are the lume-filled rectangular index- markers with pointed ends.