Close Encounters of the Bird Kind: “Dark Skies” is a Creepy If Not Particularly Original Alien Encounter Thriller 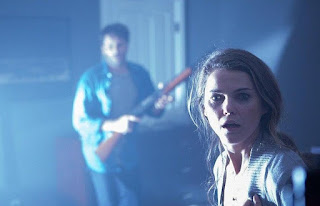 There’s a moment in “Dark Skies” when a family’s home is slammed by nearly hundreds of birds. It’s a fun and creepy nod the great Master of Suspense Alfred Hitchcock. There are plenty of other nods to be had here. It’s a movie that owes to a lot to films that came before it, but if you can see it a tribute rather than a rip-off, you might certainly find yourself enjoying what “Dark Skies” has to offer. It’s essentially a lower budgeted version of “Signs” with the haunted house fun of “Insidious” and “Paranormal Activity.” Those of you who groaned when I mentioned “Signs” would be happy to know however, the film has a much more satisfying payoff than that M. Night Shyamalan thriller.

In most movies that involve aliens coming to earth, the aliens invade in a grand way whether it be blowing up buildings, rising from a crowded city intersection, posing as high school teachers, or nuking Congress. Here it’s suggested that aliens have invaded a long time ago and they’re slowly choosing people to abduct. And do what with them? No one really knows and neither does the film really, perhaps a sequel would let us know?

In “Dark Skies” Keri Russell plays Lacy. She’s a wife and mother of two sons and her family is having some financial troubles. Her husband Daniel (Josh Hamilton) is struggling to find a new architecture job. Her youngest son Sam has been having bad dreams of the Sandman, who his other brother Jesse has explained wants to steal Sam’s eyeballs. An older brother’s job is to scare his younger brother in any way possible. Strange happenings begin happening in their suburban home. What appears to have been animal breaks in a eats food from the fridge. Someone breaks in and sets up a beautiful display of kitchen items, creating an odd shadow pattern on the ceiling. Someone even removes all the photos from their picture frames in the living room. It doesn’t take long for Lacy to search the internet for explanations and one just might have something to do with beings from another world.

I found it odd that such strange occurrences happen so quickly and without warning in the film, but the movie doesn’t want to waste its briskly paced runtime. There’s a sense of doom pervading the atmosphere which is helped along by the fact that the family is darned likable. Their financial problems aren’t exactly helping matters and when strange marks begin appearing on the boys’ bodies the parents are quickly the ones to be blamed. The film bears some resemblance to the haunted house thriller “Insidious” mostly because it shares a producer. These films are great in that they’re created with very little money, but have the look and sheen of a bigger budgeted film. And it’s a great way to force the filmmakers to get creative. Expensive special effects can only take you so far. The film has a genuine air of suspense and I’d be lying if I said I wasn’t creeped out more than a few times.

I was admittedly a little worried when I found out the film’s writer and director Scott Stewart has previously worked on “Priest” and “Legion” but I found his work here to be subtle and atmospheric. He spends his time developing characters were care enough about and works in some genuine frights with standard jump scares. It’s a wonderful mix of Paranormal Activity type chills with a strictly sci-fi flick undercurrent. Sure the film doesn’t really do or say anything particularly new or original, but it’s harmless enough to recommend to anyone who strongly wants to believe.  GRADE: B
Posted by Chris at 12:06 PM