Russian Distressing: There’s Nothing Good About “A Good Day to Die Hard” 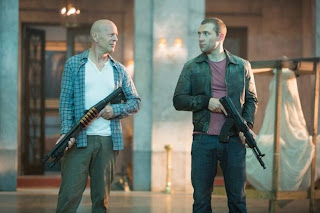 Nothing good comes out of “A Good Day to Die Hard.” Even as a not-so-hardcore general fan of the “Die Hard” franchise I can spot a lame entry when I see one. You’d be well advised to spend your money on literally anything else: groceries, cat food, a bus ticket, hiring a hit on whoever thought this movie was a good idea, etc.  It’s not so much that it’s a bad “Die Hard” movie, it’s really just the fact that it’s a bad movie in general. It’s story unnecessarily complex, not interesting, and worst of all just plain generic and unmemorable. You can forgive the Die Hard films for not being exactly plausible; that’s not the point. These movies achieve such a state of ridiculousness you wonder how anyone could have conceived of them in the first place. Here, we get a poor excuse to have Bruce Willis killing bad guys in Russia. It doesn’t quite feel like a Die Hard film and I’m convinced the story probably never started out as one in the first place.

The film opens with lots of Russian characters talking in Russian. We patiently await any sign of John McClane, the tough, rugged New York cop who’s killed lots of bad guys in four previous films. When he finally shows up there’s not much fanfare. It’s hardly a hero’s entrance; just him shooting at some paper targets. He goes over to Russia to help out his adult, estranged son, who’s been arrested there. They haven’t talked in years. Turns out the guy has been working deep undercover cause he’s in the CIA. Almost immediately the two butt heads and are constantly bickering. John’s son Jack (played by Jai Courtney, who’s neither charismatic nor all that likeable, which are exactly the two qualities this role requires) calls his father “John” instead of dad, which is what usually happens in movies about estranged fathers and sons. And it will take shooting lots of bad guys and jumping out of windows to bring these two closer together. Shouldn’t this movie have been released on Father’s Day instead of Valentine’s Day? But I digress.

When I wasn’t bored watching incomprehensible story elements or not that shocking character reveals or forced and lame attempts at humor, I was looking at my phone wondering when it would all end. But what about the action sequences? I mean honestly, no one watches a Die Hard movie for its character development, right? The action is ok, but is nothing earth shattering, which is exactly what’s required in the fifth entry of a long running action series. You must one up the previous entries, of which the last one featured a car leaping into the air and crashing into a helicopter. How do you beat that? Well I guess you can’t really. This one features McClane driving a truck off a bridge and driving on top of mack trucks and crushing cars. It’s decent, but the whole chase sequence is so shoddily edited, I couldn’t quite figure out who was where and in what vehicle.  And worst of all, there’s no memorable bad guy. I remembered he ate carrots, and that’s about it.

How did this movie end up as such garbage? There are answers. Director John Moore, who hardly has a good movie on his resume, had previously made the Max Payne movie and The Omen remake.  That sort of makes sense. And then you find out that screenwriter Skip Woods has previously written X-Men Origins: Wolverine and The A-Team. Ah ha. Even the editor has worked on purely bad movies like Aliens vs. Predator – Requiem. Bingo. There’s an important lesson to be learned here. A group of filmmakers who haven’t previously made a very good movie, will therefore most likely not make a very good fifth Die Hard movie. See it and tell me you don’t agree. I think it’s a good day to end this franchise for good.  GRADE: D
Posted by Chris at 9:37 PM

After looking over a number of the blog posts on your site, I honestly appreciate
your way of blogging. I saved as a favorite it to my
bookmark site list and will be checking back in the near future.
Please visit my web site too and let me know your opinion.


Here is my web blog; male escort for lady