Different Strokes: “Amour” is Beautiful and Heartbreaking, But Certainly Not for Everyone 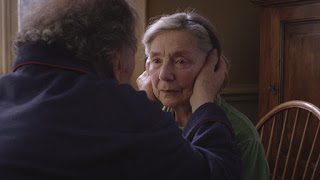 It must be said that I believe “Amour” is provocateur  Michael Haneke’s first PG-13 rated film. Why is that important? It’s because a majority of his films offer rather disturbing and shocking examples of sickening human behavior. The most sickening thing about “Amour” is that it realistically portrays an elderly couple as they move closer in time towards death. Austrian filmmaker Haneke is no stranger to controversy, but he certainly is a stranger to the Academy Awards, having received his first two nominations this year for “Amour” which is probably one of his most accessible films ever. This certainly isn’t a crowd pleaser and appropriately belongs in college film classes and on the shelves of snooty art house film fans. That isn’t to say that one can’t get something positive out of it: including Oscar-worthy and heartbreaking performances from its lead actor and actress.


While the film, like most of the director’s work, sort of moves along at a snail’s pace, I found myself strangely drawn into the lives of Anne and Georges. They’re aristocratic, retired music teachers in their eighties. One day Anne (Emmanuelle Riva) has some sort of “episode.” She stares blankly at her husband while practically in midsentence, unaware of her surroundings. Georges (Jean-Louis Trintignant) worried about his wife’s health is ready to get help when she seems to snap out of it. Later on after a scene we don’t get to witness, Anne has a stroke and must have surgery. She returns home, wheelchair bound with half of her body paralyzed.  Georges must take care of his ailing wife which, as we can clearly see, is extremely difficult for a man of his advanced age. But they’re a loving, married couple. After all, the film’s title translates to “love.”


Amour is basically two hours of an elderly couple dealing with one of them having had a stroke. So what’s the big deal anyways? It’s all in the direction and performances. This could have easily been a movie-of-the-week, but Haneke has a masterful cinematic eye. Just watch some of the scenes he presents us with. Take for instance in one of the film’s beginning scenes, we see an audience pack into a theater waiting to watch some kind of performance. The camera takes the point of view of the stage. The performance begins, and we hear a pianist playing. The camera never cuts to who’s playing the piano. We watch the audience and the audience in the film watches us. It’s so simple, yet masterful.  Haneke is fascinating at what he chooses to show us and not show us As the film progresses we don’t see much improvement from Anne, but nothing much worse either. But one morning she wets the bed. In the next sequence she’s bed ridden, hardly able to even speak. We assume she suffered yet another stroke, but we’re not privileged to see it. In a way Haneke spares us. Haneke’s scenes play out in real time, using extremely long takes that would certainly be cut down in any other film, but in not cutting away we get to spend so much time with this couple that when even more extreme tragedy strikes we feel it even more.


And in the end, which I won’t divulge, we remember the film’s title and what that means for the characters we’ve watched for the past two hours. We see what love drives some people to do. Riva, who received an Oscar nomination, is simply devastating. She’s gives a truly riveting performance. And at age 85, it makes it all the more amazing. Her and Betty White need to get together for a buddy comedy. With five nominations one can see why the Academy felt so passionately about film as endearing and heartbreaking as this one. It'll certainly hit close to home for people who've had to deal with the death of elderly loved ones and it'll certainly make you remember how mortal we all are. The film is altogether slow yet riveting and as amazing as the performances are I’m not sure I ever want to witness it again.  GRADE: B
Posted by Chris at 4:38 PM

This is a topic which is near to my heart... Thank you!
Where are your contact details though?