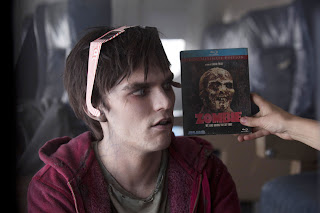 Zombie-infused romantic comedies aren’t a particularly new thing (like 2004’s “Shaun of the Dead” which is an obvious must-see and 1993’s underrated misfire “My Boyfriend’s Back,”) but “Warm Bodies” certainly takes it to a new level of cleverness and originality. The movie, based on the young adult novel – and sort of cashing in on the “Twilight” phenomenon which has finally ended – is from the point of view of an undead young zombie who was once a living young man. One day, as a group of human survivors attempt to take him and his zombie horde out, he sees the girl of his dreams. How could these two ever possibly get together? And how could it last?

“Warm Bodies” uses “Romeo & Juliet” as a blueprint to tell its story – complete with balcony scene. The young zombie, who can’t even remember his own name, (he’s played by Nicholas Hoult) – but we hear his thoughts in voiceover – stumbles through life as a zombie. (He’s later given the name “R”) He lives around an airport, shuffling along, occasionally meeting up with his friend “M” (Rob Corddry) where they proceed to have a conversation of grunts. He even makes his home in an abandoned airplane where he’s gathered elements he vaguely remembers from his past life as a human being. Enter Julie (Teresa Palmer), who he rescues from a zombie horde and whisks her back to his place, where he insists it’s safe.  Julie’s father Grigio (John Malkovich) is the leader of a large group of human survivors. Let’s just say he wouldn’t take too kindly to his daughter shacking up with a zombie.

The film takes its time letting R and Julie get to know each other. After all, this is one of the most ridiculous things you could probably see in a movie, but writer/director Jonathan Levine (director of last year’s wonderful cancer buddy comedy “50/50”) totally lets you buy into this unlikely premise. In this post-apocalyptic story, zombies who eat the brains of the living will gain their memories. R eats Julie’s boyfriend’s brains, so he instantly falls for her. The big question remains whether Julie will begin to feel anything for R, who somehow slowly begins to become more human as the story progresses.

“Warm Bodies,” despite its sometimes hokey plot and mildly gross zombie scenes, remains innocently romantic and fun, and most importantly, creative enough to win over fans of either genre. If you strip away the elements you really have a far more entertaining version of “Twilight,” but with way more likable characters and a premise that doesn’t feel forced or overly drawn out. You care about R and Julie, and you can buy them as friends and possible lovers. And the film sets up its own fascinating conflict between the zombies who are too far gone to be cured – called Bonies – and the zombies who just may be able to regain their own memories, and heartbeats.

In a time when zombie pop culture has practically reached its breaking point, it’s fun to see a new twist on the familiar. It’s fun to see such a ridiculous premise actually work outside the usual genre trappings and that’s mostly due to Levine’s clever script and assured direction and the actors’ great performances. The movie a real sense of humor as well. Here’s a great little movie with brains and heart and guts. Literally.  GRADE: A-
Posted by Chris at 2:30 PM