I’m a Celebrity… Get Me Out of Here! “Movie 43”is Pretty Stupid, But at Least I Laughed 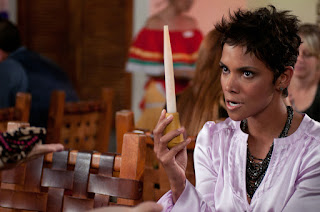 I’m not sure what most critics expected with the sketch comedy flick “Movie 43.” I’m not even sure what all the celebrities in it expected once they saw it put together. My guess is they refuse to see it. But this thing has so many famous folks jam packed in it you’d think it was some kind of glitzy charity event. It has Kate Winslet, Hugh Jackman, Naomi Watts, Halle Berry, Richard Gere, Uma Thurman, Anna Faris, Gerard Butler, Emma Stone, Dennis Quaid, Greg Kinnear, Elizabeth Banks, Live Schreiber, and even McLovin. And there are plenty more where that came from too. The best thing I can say about the movie, which is pretty awful as whole in all honesty, is it’s sort of fun to see really famous people acting like total nut jobs.

Yes, it’s fun to see Oscar-winner Kate Winslet gag at the sight of the testicles hanging down from Hugh Jackman’s chin. Yeah I enjoyed watching Oscar-winner Halle Berry make guacamole with her, obviously fake, booby. I thought it was funny watching Elizabeth Banks get pissed on by an animated cat. I enjoyed Emma Stone referencing The Golden Girls. It’s funny thinking that Anna Faris wants her fiancé to poop on her. There’s lots of poop in this movie, yes there is. It’s childish, irreverent and altogether silly humor, but what makes it fun is seeing just how game these actors are. Sure in many cases I’m sure they were practically blackmailed into appearing in this, but I have to admit it was fun to see a stupid movie in the vein of a “Kentucky Fried Movie” again.

“Movie 43” was conceived, appropriately, by one of the Farrelly Brothers, who shot the film over several years as certain actors became available. All the segments are directed and written by several filmmakers including one by Brett Ratner, one by Elizabeth Banks, and two by Farrelly himself (probably the best of the bunch). Even if one vignette is painfully unfunny, such as the superhero skit with Justin Long, Jason Sudeikis, Kristin Bell, and Uma Thurman, they’re over quickly enough that you don’t have to sit in pain for too long. And at a swift 90 minutes, the movie ends quickly enough.

I actually kind of admire “Movie 43” for being the epitome of tastelessness and offensive humor, but it’s certainly not for everyone. In fact, it’s really for no one. I mean I did laugh a bunch of times in spite of the lunacy going on onscreen, but the movie is really ultimately just plain dumb and pointless. It only even slightly works if you find it hilarious watching really famous people doing really stupid and gross things. But I think I’m actually one of those people. The movie’s structure is just plain awkward, using a framing device which involves Dennis Quaid pitching horrible ideas for a movie, which involves the segments that make up the film. Funny thing is Greg Kinnear, playing a producer, insists that Kate Winslet would never appear in a movie where a guy has testicles hanging from his face. If that were only true.

I’m not quite sure what the title refers to, but I’m assuming 43 is the number of actors who wished they never appeared in this thing.  GRADE: C+
Posted by Chris at 11:38 PM

I read this article fully regarding the comparison of newest and
previous technologies, it's amazing article.