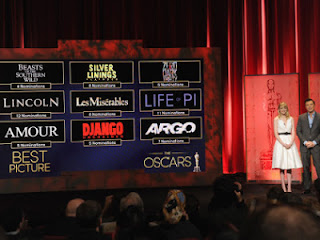 UPDATE: The nominations have finally been revealed, there are certainly some shocks. Anyone who predicted the Directing category correctly must be psychic. Ben Affleck and Kathryn Bigelow were both shockingly snubbed. Amour's Michael Haneke and Beasts of the Southern Wild's Benh Zeitlin replaced them. Haneke was not really as shocking, but no one would have predicted Zeitlin. Argo's best picture chances are zero to slim now. Unless it can pull a Driving Miss Daisy and win without a directing nod (it did get an editing nomination which helps a little). There was a strong showing for Silver Linings Playbook with all four acting categories receiving a nomination. Lincoln dominated as expected, though broke no records, with 12 nominations, with Life of Pi bringing in 11. A stronger showing indeed. I dont know why I doubted the love for that film who's buzz seemed to wain in the last month or so. I'm personally glad Hitchcock, Prometheus, and Ted can now call themselves Oscar-nominated films. I'm also glad Skyfall got five nods, including original score for Thomas Newman who i'm a big fan of. Unfortunately I'll now have to sit through Amour, which I'm not really looking forward to. I did so-so with my predictions. I'm proud that I got all five Editing nominees correct. Many thought SLP wouldn't get that nod but I saw it coming. Even Mirror Mirror for costume design wasn't a guarantee, but has anyone actually SEEN those costumes? I can't imagine Lincoln not winning Best Picture at this point. 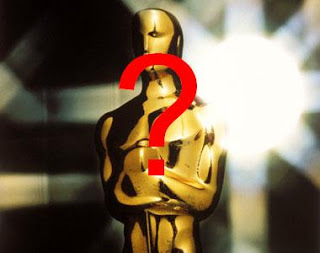 [from Wednesday]: The nominees for the 8th annual Academy Awards will be announced on Thursday morning, my second favorite movie-related day of the year. Here’s the list of the film and actors I think will be announced by Emma Stone and Seth McFarlane. You’ll notice that Best Art Direction is now called Best Production Design and the Makeup award is now Makeup & Hairstyling. Also, the Original Song rules have changed, after last year’s embarrassing debacle; there will be five nominees. Without further ado here are my sorta fearless predictions:


This is the second year the Academy will see a range of 5 to 10 nominees in the Best Picture category. It remains to be seen how many films will actually be nominated. I’m thinking there will definitely be nine or even ten nominees. If last year’s weaker slate of films produced nine nominees there’s no reason to think that there won’t be just as many nominated this year.  If this was a traditional year with five nominees I firmly believe they would be Argo, Les Miserables, Lincoln, Silver Linings Playbook, and Zero Dark Thirty. I’m curious as to how the foreign film Amour fits in, if at all. Traditionally, only really popular foreign films make it into Best Picture, the last being Crouching Tiger, Hidden Dragon. Have any people who aren’t Oscar freaks like me even heard of Amour? Exactly. I’m curious if Beasts of the Southern Wild, Moonrise Kingdom, and The Master could make it in, I’m not quite sure about the later. But anything could happen. I actually wouldn’t be overwhelmingly surprised to find Skyfall or The Best Exotic Marigold Hotel show up here, but those are definite long shots for sure. If my predictions hold up Lincoln could be on its way to scoring 14 nominations which would tie it with Titanic and All about Eve for the most nominations ever. It’s probably more likely it’ll receive 12 or 13. Argo is poised to get at least 5 or 6, though it could receive more in some craft categories, which it may need if it’s going to go all the way.


We’ve got a pretty decent race here. All five have been cited by the DGA, but I’m only pretty confident in four of these choices. Tom Hooper seemed like a lock for awhile, but then his movie was released and a flood of backlash ensued. Many complaints people have about the movie seem to do with his direction of the material. So I find him rather vulnerable. I think David. O. Russell could easily replace him, but Hooper gets the edge since he didn’t direct a “comedy.” Michael Haneke for Amour is a possibility since the Directors Branch is a little more daring than the other branches. If this does end up as the final five, Affleck would be the lone nominee who hasn’t already won in this category - though he did win for writing “Good Will Hunting” of course. A directing category in which all the nominees are previous winners, how fun is that?


Joaquin Phoenix seemed like an obvious choice so long ago. What happened? The divisive nature of his film I think. I feel pretty confident in this five, but Cooper is probably the most vulnerable – though with nominations from the BFCA, Globes, SAG, and even BAFTA a miss here would be an all-out snub at this point. How cool would it be for Ben Affleck to score a surprise nod here ala Clint Eastwood in Million Dollar Baby?Also, it's worth noting that no actor or actress has even won an Oscar for a Spielberg movie (though nine have been nominated). If anyone could pull it off surely Day-Lewis could right?


I’m still not sold on Amour’s Emmanuelle Riva or Beasts of the Southern Wild’s Quvenzhané Wallis making it. If either of them did, they’d be the oldest and youngest nominees, respectively, in this category ever. I’m not very confident in Cotillard or Mirren. Either them could easily be left off, but SAG nominated them, so that’s why I’m going with them. Watts didn’t score a BAFTA nom which worries me a tad, but I’m sure the Academy will be on her side. It’ll be a battle between former nominees Chastain and Lawrence for the win.

Best Actor in a Supporting Role


What a weird category this year. The precursor awards have been all over the place. I could easily see Christoph Waltz (who is totally a lead by the way) bumping out DiCaprio, or both of them getting snubbed. Bardem got a SAG nom, but this would be the first ever acting nod for a James Bond film. Of course, what better way to start then with one of, if not the, best Bond movies ever? There’s not even a frontrunner for this category yet. I really think anything can happen here.


Best Actress in a Supporting Role


Just give it to Hathaway now already. The others will just be happy to be nominated. Especially if these five ladies get nods, Hathaway would be the only one who hasn’t already won. Kidman is a sort of a long shot I know, but SAG nominated her, so why not go all the way? Probably not, but crazier things have happened. I’m sure Adams will be the most likely one to replace her – though Smith is not necessarily a guarantee either.


The Perks of Being a Wallflower


I’m not sure how Les Miserables and Life of Pi could be Best Picture nominees without also being Screenplay nominees but it happens more often than you’d think. The writer’s branch is notorious for throwing out curveballs in these two categories, often citing nominees no one even thought would be nominated. Wallflower could happen as many have suggested, but who knows really?


I’m still not certain that Looper has a very good shot at a nomination here. Joseph Gordon-Levitt films, with the exception of the ensemble-driven Inception, tend to be strangely snubbed in this category (remember when everyone was predicting 500 Days of Summer and last year’s 50/50?). Having said that, anything can happen here. The writers tend to throw in a foreign film (Amour), a quirky comedy (Moonrise Kingdom), a weird movie that’s just happy to be nominated (The Master), and then the obvious Best Picture nominees (Zero Dark Thirty, Django Unchained). There you have it.


(Alt – Rise of the Guardians)


Disney could score here with three nominated films. I’m not quite sold on Rise of the Guardians, or ParaNorman actually, since some artsy fair tend to get thrown in here. Which is why I’m going with The Painting; a movie no one, including myself, has ever heard of.


And the rest of the pack:


How to Survive a Plague


The Hobbit: An Unexpected Journey
Prometheus
Posted by Chris at 8:59 AM

This is a topic that is close to my heart...

Best wishes! Exactly where are your contact details though?


Feel free to visit my blog :: How To Dunk