Bipolar Express: You’d be Crazy Not to Like “Silver Linings Playbook” 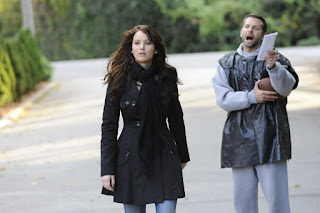 There’s a single moment at the end of “Silver Linings Playbook” that makes the entire movie worth watching. I won’t spoil that here however. It’s such a crowd pleasing moment in a nice film that tackles the difficult subject of mental disorders. It’s a movie that walks a fine line between comedy and serious drama. I’d still call this a drama with moments of humanistic comedy but if you want to label this thing a comedy (I’m looking at you Golden Globes) then be my guest. Bradley Cooper (yeah the guy from The Hangover) and Jennifer Lawrence (yeah the girl from The Hunger Games) have such a wonderful chemistry together you almost want there to be a Silver Linings Playbook Part 2. Oh god that actually sounds awful, please don’t let it happen.

Director David O. Russell who brought such a strong sense of fun and drama to his quirky sports family drama “The Fighter” has delivered another eccentric little film about a man named Patrick (Cooper, in a terrific performance) who is recently released from a stay in a mental institution into his parents’ care. The reason he’s there is not yet known right away. Here he has to deal with being on the outside world and attempting to reconcile with his estranged wife, who has a restraining order against him. His parents are played by Robert De Niro and Jacki Weaver who both give impressive performances. They’re not as weirdly oddball as the parents in “The Fighter” but the movie has enough weirdness to make even the strangest families seem normal.

During dinner at a friends house, Patrick meets Tiffany (Lawrence, also equally good) who hasn’t quite been diagnosed with any mental problem but certainly suffers from some kind of apparent personality disorder. Tiffany, although young, has recently lost her husband who was a police officer. They’re instantly drawn together and we get to watch them sort of go crazy together.

I have to credit Russell with creating characters that aren’t always so easy to like. I could easily see regular audiences finding faults with the choices made by these characters, but it also makes these people more realistic. And it just so happens to be fun to watch a bunch of loony characters interact and see what exactly they’re going to say and do next. There are interesting subplots involving a dance contest and betting on Eagles football games. How Russell has managed to bring sports and dance together is something short of revelatory. There isn’t necessarily the most surprising ending here, but the journey towards that direction is what keeps things moving at a fascinating pace. Even the filmmaking style reflects the character’s state of mind. Russell’s camera is constantly moving, there’s lots of fast editing, and even Danny Elfman’s unconventional score adds to the abnormal proceedings.

“Silver Linings Playbook” isn’t a preachy film and doesn’t give you its opinion on the state of mental illness. It just happens to be about people with that problem. It doesn’t offer solutions or remedies or suggestions on how to deal with it. This isn’t a documentary. But it is a fascinating behind the scenes look at a wacky fictional family and how they struggle with living their lives. See it if only to make your own family seem completely normal in comparison.  GRADE: B+
Posted by Chris at 9:34 PM

This watch has been trouble from the start if you check all replica watches stores to you. I am very disappointed in your customer service by suggesting that I should pay shipping fees. I am an honest rolex replica and I am sure you are a decent company that is why we came to you for my 75th. birthday. I have been told by rolex replica sale store company that I can make a charge back against you which at this stage I am reluctant to do and given you every chance of rectifying this problem. I am really sorry to inform you that the winder on the replacement hublot replica watches has failed. I have taken it to a small watch repairer who says the screws on the winder are no good. I am deeply disappointed that this should happen again. Whilst I am sure that you are also disappointed with the tag heuer replica uk after trying to help with this problem I am now left with a problem.