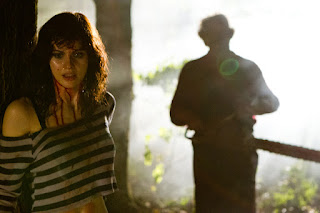 Let it be said that “Texas Chainsaw 3D” doesn’t really have much of a reason to exist and it’s just a stupid horror movie that’s been rightfully dumped in the beginning of the lame January movie slate. Having said that true horror fans will find something to like here as it delivers some goods in that department. Those who liked last year’s insult-to-horror-fans “Cabin in the Woods,” including many horror genre fan self-haters, might want to steer clear of this new take on the Leatherface legend. Actually working as a direct sequel to Tobe Hooper’s iconic 1975 cult slasher flick, “Texas Chainsaw 3D” takes place right after the events of the original film, ignoring the many silly sequels and the Michael Bay-produced flashy remake and prequel.

After a promising start featuring footage from the original film (now in 3D!) the film picks up directly after that film ends. Sally was the lone survivor of the massacre and a horde of rednecks decide to show up at the Sawyer household and burn it to the ground. Unfortunately the one family member they most wanted to kill (Leatherface, although never actually referred to as such) is the one who survived. Also, a baby survived and was adopted by some locals. Flash-forward to the present day in which Heather, (Alexandra Daddario) who appears to be in her twenties but should technically be in her forties if she was a baby in the early 1970s, but let’s ignore that plot hole, finds out she’s be adopted and has actually inherited a Texas house left to her by a grandmother. She decides to check it out with some cannon fodder, err, friends, and low and behold, the chainsaw-wielding maniac has been living in the basement.

Now all of this stuff is pretty standard really and familiar if you’ve seen this films before. A bunch of young people pack into a van, drive through Texas, pick up a hitchhiker, and get killed off one by one. Yes those familiar elements are there but what’s most interesting about “Texas Chainsaw 3D” is its surprising third act. It’s features a development which I found more admirable that actually likable. Most people will probably balk at the idea, but it’s certainly something I haven’t seen before and I respect the screenwriters and the director for trying it out.

Director John Luessenhop has made a way less flashy modern Chainsaw film which is admirable. He fills the film with obvious nods to the original film. Notice that dead armadillo? Or that low angle shot of that chick’s bright red short shorts? What about that startling sequence with the ice box? Fans of the original will even delight in spotting original stars Gunner Hansen and Marilyn Burns in small cameos. The quartet of young actors are fairly forgettable, but Daddario makes a decently heroic Final Girl. Shaun Sipos plays the mysterious hitchhiker the group picks up and he’s the spitting image of a young “Thelma & Louise” era Brad Pitt, charm and all. Luessenhop doesn’t kill of his cast very quickly and actually focuses on suspense at some points including an intense moment involving a van that won’t start and a metal gate. He also doesn’t linger on the gore like the remakes, although there’s plenty of squishy red stuff. This is definitely more slasher and less torture porn. And there are fun 3D moments but it’s not as gimmicky as some 3D horror films.

“Texas Chainsaw 3D” isn’t a movie worth recommending to most people except die hard horror buffs. It’s pretty stupid actually but it’s briskly paced and I can’t help but admire the direction it goes in. I’m not sure it’s totally successful but for a film that doesn’t need to exist to try so hard to pay tribute to the original film and try something relatively new I couldn’t help taking one more excursion to Leatherface’s dingy lair. GRADE: B
Posted by Chris at 10:20 PM

Hello would you mind letting me know which web host you're working with?

I've loaded your blog in 3 different browsers and I must say this blog loads a lot quicker then most.
Can you suggest a good internet hosting provider at a fair price?
Thanks a lot, I appreciate it!

Bulks from the advertisers are primarily private homeowners,
letting managers and property agents. Businesses will heavily determined
by customers because of their survival, without customers a business would
cease to exist. it may also be used for headhunting and employment.