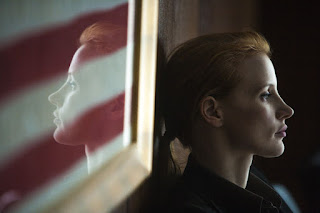 I liked “Zero Dark Thirty,” but like most CIA spy thrillers it had one familiar element that tends to annoy me: it’s confusing. The CIA is such a secretive organization, as it should be, and yet time and time again in movies about it I find myself sometimes dumbfounded about what exactly is happening. Maybe it’s that I just don’t care all that much? I know it’s not with every movie since I was able to follow the similarly themed but way more entertaining “Argo” enough to enjoy it as one of the best films of the year. The basic elements are there in “Zero Dark Thirty” a CIA woman is on a decade long search for one of the most wanted terrorists in the world: Osama Bin Laden. Of course, we know how this story ends, but we don’t exactly know how everything will play out. There are some surprises and shocks and things we may have heard about in the media. It’s a rather well-made and sometimes intense (especially in its last half hour) film by Oscar snub and director Kathryn Bigelow (who made the superior but similar Oscar-winning “The Hurt Locker just a couple years ago).

Oscar nominee Jessica Chastain, who you might remember appeared in nearly 80% of all movies back in 2011, plays CIA operative Maya. Is Maya a real person? I don’t know. I’m sure she’s based on a real person or perhaps several. Set shortly after the events of 9/11, in the beginning of the film, she’s assigned to assist a guy named Dan (Jason Clarke) interrogate a detainee who may have information on Saudi terrorists. Dan repeated tortures the prisoner. Time passes by as Maya is deep in a search for a link to al-Qaeda leader Bin Laden. This search takes up most of the film. Maya, much like Clarice Starling in “The Silence of the Lambs” is a woman operating in a man’s world, whose determined to find what she’s looking for (a crazed killer in both instances).

Along the way May narrowly escapes death herself several times. Working in the Middle East is not exactly the safest places to be employed. Bigelow stages some of these sequences with surprise and suspense worthy of Hitchcock. Of course the rather bloated runtime doesn’t really do her any favors. And Chastain’s performance is certainly fun to watch as she progresses towards sniffing out the terrorist leader who many refer to as if she’s looking for a needle in a haystack. Perhaps, but it’s the determination to find that needle that keeps her going. This movie could have also easily been called “The Impossible.”

A majority of the films overlong runtime is devoted to characters talking about things us laypeople won’t really quite grasp. I could grasp enough of Mark Boal’s thoroughly researched script to keep myself chugging along, but it doesn’t always have the tightness to keep myself overwhelmingly thrilled the entire time. In contrast, “Argo” was a monumental achievement of entertainment and tremendously intense suspense. The film finally does come alive in the film’s hotly anticipated final sequence which we’ve all read about: the raid of Bin Laden’s compound. It’s a sequence of nearly unbearable tension. The use of sound, or sometimes lack thereof, and editing is masterfully done. While no one filmed the real life incident, I imagine this would be the closest thing to the real thing we could hope or ever want to get.

“Zero Dark Thirty” feels like film that’s to be more admired than actually loved. It is way more of a procedural and I felt rather distanced from it. I didn’t find myself too emotionally invested but Chastain is very likable and she’s a great strong presence in a film filled with very few female characters. You’d never necessarily think a woman was behind the camera, but with no directing nomination, you’d have thought the film must have directed itself anyways.  GRADE: B
Posted by Chris at 8:40 PM

Greetings from California! I'm bored to death at work so I decided to browse your
blog on my iphone during lunch break. I enjoy the knowledge you
provide here and can't wait to take a look when I get
home. I'm surprised at how quick your blog loaded on my cell phone ..
I'm not even using WIFI, just 3G .. Anyhow, superb site!

Check out my webpage; onlinecasinos.us.org

My brother suggested I might like this web site. He was entirely right.
This post actually made my day. You cann't imagine simply how much time
I had spent for this information! Thanks!

Have a look at my website ... anxiety symptoms in teens