Lady in the Water: The Tsunami Drama “The Impossible” is an Emotionally Riveting Experience 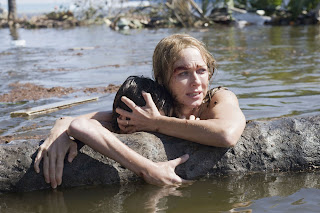 “The Impossible” is one of the best disaster movies I’ve ever seen. And I’ve seen a lot. It works so well because it isn’t really one of those “fun” disaster movies where you get to see popular landmarks blow up. It’s one of the few that’s actually based on a real life event: the tragic 2004 Boxing Day Tsunami that occurred in the Indian Ocean, killing over a quarter of a million people. “The Impossible” tells the true account of just one family affected by this catastrophic event and follows them as they endure the horrors of an event so unimaginable you’ll be shocked at what you see. It’s not a film that’s always extremely easy to watch; it never shies away from showing the true power and destruction and death a tidal wave can cause. And even if the basic story elements are that of a TV movie-of-the-week, the performances and production value make it an Oscar-worthy achievement that has to be seen to be believed.


The film hinges on the nearly perfect performance of Naomi Watts as Maria. She’s traveling to Thailand for a Christmas vacation with her husband Henry (Ewan McGregor) and three young sons. Little do they know that in just two days a large underwater earthquake will cause a tremendous tidal wave to wash them away while they lounge out by the pool at their fancy resort. The tidal wave actually occurs rather quickly into the film and it’s a spectacular sequence staged by director Juan Antonio Bayona (who made the creepy Spanish thriller “The Orphanage”). While you can tell the film doesn’t have the budget of say an Armageddon, it makes up for it in a heartpoundingly disturbing recreated disaster sequence. Everyone is instantly swept off their feet by the nearly 100 foot rogue wave. As Maria comes to while being swept away in the raging water she tries to reconnect with her eldest son Lucas (a simply splendid Tom Holland). Here the badly injured mother and son must make sense of what just occurred while attempting to reconnect with their other family members. A task itself which seems impossible.


I found myself simply transfixed by what was occurring onscreen, unlike much of the Oscar movies that have been released thus far. The disaster sequence was as horrific as it was impressive. Watts was certainly a trooper as was the young Holland who gives one of the film’s most impressive performances. His presence reminded me of what charmed the pants off people who watched Jamie Bell in “Billy Elliot” back in 2000. Equally impressive were the performances of the two younger siblings played by Samuel Joslin and Oaklee Pendergast. McGregor gives one his best performances as a father who refuses to give up looking for his wife and son. I was overwhelmed by how much I became invested in the reunion of this family torn apart. There are certainly moments of well-earned tears.


“The Impossible” is simply a stunning and remarkable film. It’s so much more than a disaster film; it’s really an intimate drama about family and reconnection; and more specifically a touching story about a mother and a son who refuse to quit. It’s inspirational without ever once feeling manipulative or melodramatic. This is not a Lifetime movie. This is a thrilling and moving piece of pure cinema; the sights, the sounds are extraordinary. It’s expertly crafted and gorgeously shot. Bayona’s superb directorial flourishes are outstanding, including some truly gripping and terrifying footage. You’ll be wondering for ages how on earth he and cinematographer Óscar Faura were able to capture it. Take for instance Maria’s literally first person account of being swept away by the wave. It’s something no person would ever want or hope to experience, but with this film you will. This is a truly rewarding and breathtaking film. I was swept away by it and you will be too.  GRADE: A