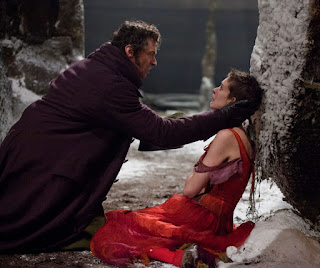 Where there’s a will there’s a Hathaway. The wonderful young actress who just as many people find annoying as likeable steals the show in the movie musical “Les Misérables,” based on the extremely popular stage musical, which was based on Victor Hugo’s novel about poor people in 19th century France. Unfortunately as the doesn’t-live-very-long-because-she-turns-to-prositution-for-money tragic character Fantine, Hathaway leaves the film too early but makes an indelible mark indeed. Fortunately she’s practically bound for Oscar glory as tragic heroine who sort of serves as literally the mother of the story’s MacGuffin: her illegitimate daughter Cosette.

As someone who’s seen the Broadway stage musical and was never truly impressed, all I saw was a bunch of actors singing boring songs with French accents, I never felt truly gripped by the movie version as well. In the film, Hugh Jackman plays Jean Valjean. He’s a thief. But he’s a good and decent man. He only steals a loaf of bread. But due to circumstances out of his control, like existing as a poor man in 19th century France, he’s sent away to prison and under the watchful eye of the ruthless Javert (Russell Crowe, who can sing marginally well, remember he’s in a rock band too). Jean and Javert have an instant rivalry, but eventually Jean is released, breaks his parole intent on staying a good man, and goes into hiding only to emerge years later as a mayor and owner of a factory. Not a great way to hide out in my opinion. There, one his factory workers, Fantine (Hathaway), begins selling her body to make money to support her child after the factory’s foreman fires her. Since we know Jean is a good man he makes it his mission to take care of Fantine’s daughter Cosette (Isabelle Allen) and raise her well. She becomes just as morally sound as she does beautiful, (now played by Amanda Seyfried) which of course attracts the attention of a young suitor named Marius (Eddie Redmayne) but he’s also starting a revolution which can only end sadly in a story like this. Throw in a love triangle with Éponine (Samantha Barks) who’s also in love with Marius, and you have a recipe for tragic boredom. After watching all of this, including the two bumbling, greedy innkeepers played by Sacha Baron Cohen and Helena Bonham Carter, who provide comic relief, I really wish that Fantine didn’t succumb to her unnamed illness. She was way more likable than any other character that appears after her untimely death. But that’s “Les Miserables” in an irreverent nutshell.


Fans of the stage musical will no doubt fully enjoy what director Tom Hooper has put on display here. He has some pretty fun cinematic devices up his sleeve, which have no doubt caused some controversy. For instance, many of his characters’ musical numbers in extreme close up. It sells the emotion and if you have an actor who can act well, which here there are many, why not? Besides, you can't do a closeup on a stage. The actors have also sung their parts live during filming as opposed to dubbing their singing in a studio. This doesn’t quite help those who aren’t as strong vocally (like Crowe) but is an interesting strategy regardless. I’m a fan of Hooper’s visual style including his interesting choice of framing. Anyone could put their actor at the center of the frame, but sometimes he chooses to have a lot of negative space around a not centered character. And of course all the production design and costumes and makeup are top notch.


But all the production value in the world couldn’t make me very emotionally attached to the film’s story. The actors singing nearly every line doesn’t quite help, neither does some of the movie’s underdeveloped relationships. I didn’t quite buy into Cosette and Marius’ love-at-first-sight romance, and didn’t quite connect to the Jean vs. Javet rivalry. The actors themselves were good, the script by William Nicholson was not. Les Miserables is a surprisingly divisive film, with some loving it and some complaining about some of its techniques. It’s certainly a well made-production with a lavish and loving attention to detail. Those who love the music and actors will certainly find a lot to adore, but overall I found myself being slightly misérable as well.  GRADE: C+
Posted by Chris at 2:36 PM

Hello! I'm at work surfing around your blog from my new iphone 4!
Just wanted to say I love reading your blog and look forward to all your posts!
Carry on the fantastic work!

There is more information for us.I really impress to visit your website.It is so good.Thanks for sharing with us.