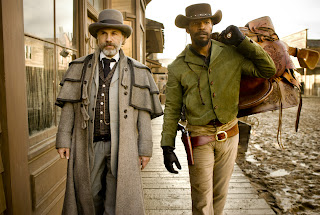 Even though Quentin Tarantino’s movies have basically all of the same elements you always tend to be surprised by what you actually see in every new movie he makes. Like his last film, the spell-check unfriendly “Inglourious Basterds,” his latest effort “Django Unchained” is another ode to violent spaghetti westerns. And this thing is loaded with blood and guts which may actually surprise some who aren’t used to Kill Bill-level violence in their westerns. Of course this movie has a sort of blackspoitation twist as it’s essentially a slavery revenge drama. During the years before the Civil War, a white man frees a black slave, trains him to be a bounty hunter, and then the black man intends on rescuing his wife from a greedy racist plantation owner (was there any other kind of plantation owner?).


First of all, the acting here is top notch. Oscar-winner Christoph Waltz, who was so chillingly charismatic and sadistic in “Inglourious Basterds,” is equally as charismatic but he’s playing a way more likable character. He’s a former dentist turned bounty hunter named Dr. King Schultz. In the film's wonderful opening he frees slave Django (Jamie Foxx) from a chain of slaves using his charm and his gun. He wants to team up with Django because he can identify some of the men he’s after. He agrees to help him rescue his wife Broomhilda (Kerry Washington) who’s now help captive by plantation owner Calvin Candie (Leonardo DiCaprio). His plantation is called Candieland. Does that count as pop culture reference? It is wonderful to see DiCaprio, who doesn’t show up for quite awhile into the film’s run time, in a showy role as a compelling villain. And oh what a villain he is. And it's fun to see Tarantino staple Samuel L. Jackson play such a prick and once popular actor Don Johnson getting fun, new material to work with here as plantation owner “Big Daddy.”


Like any good Tarantino film the movie is equally violent and controversial. The “n” word is used a lot, which is historically accurate, but no less abrasive each and every time it’s heard. And when characters get shot in this film blood spurts out in an orgy of red stage blood. There’s even a Kill Bill-like massacre sequence that literally paints the set red. What’s so ultimately satisfactory about all this is how well Tarantino balances extreme violence, humor, and emotion while packaging it into a meaningful and ultimately entertaining way. His strong flair for talky dialogue sequences are here in full form, but are never boring or dawn out, and an epic runtime simply flies by. Music and camerawork are standouts as usual too.


“Django Unchained” is Tarantino through and through and fans of his work will no doubt be pleased as they have been with his past films. Like “Inglourious Basterds,” it's fun to see Tarantino work in a historical setting, placing his crazy and weird characters in a real-life historical setting. He's made yet another extremely well-done genre film. Some may be put off by some of the elements here, but fans will no doubt rejoice.  GRADE: A-
Posted by Chris at 5:00 PM

Terrific review. My favorite film of 2012 so far. "Safety Not Guaranteed" comes in second.