The Return of the Ring: “The Hobbit: An Unexpected Journey” is Mostly for Fantasy Fans 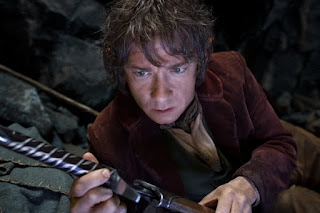 If you asked me to summarize the plot of “The Lord of the Rings” it might sound like a five year old trying to do the same. My brain doesn’t tend to work in the fantastical realm and therefore the latest fantasy adventure from Peter Jackson, the director of the immensely popular “Lord of the Rings” trilogy is a little lost on me. I imagine fans of the first three films will most likely love it, although it doesn’t seem to be a dramatically significant as the original films. “The Hobbit” book, written by literally nerd favorite JRR Tolkien, by its nature is a more lighthearted story. Therefore the film feels more lighthearted as a result. Some may see it as a negative others may not; I feel rather indifferent to the whole thing. However, “The Hobbit” never grabbed me in the way any really well done action adventure film should do.

The Hobbit’s plot doesn’t feel quite as dense as the original trilogy. It’s a simple adventure revolving around a younger version of Bilbo Baggins (Martin Freeman) who is recruited by the magical wizard Gandalf (Ian McKellen) to help a gaggle of goofy dwarves reclaim their home which was destroyed by a giant fire-breathing dragon. In the tradition of the Lord of the Rings, there is no real conclusion as this is only the first film in a planned trilogy. The group get into a bunch of random misadventures including run ins with giant trolls and creepy goblins. Cate Blanchett also shows up as one of the only female characters in Middle Earth.

One of the main problems is that with thirteen dwarves, you never really get to know any of them. Their names are too confusing to even pronounce and none of them are particularly all that memorable. Freeman is good as Bilbo, but there wasn’t really a character I could quite connect with. Fan favorite Gollum shows up to appease fans of the series mumbling nearly unintelligible dialogue in a scene that sort of halts all the momentum established for the first two hours. Although even at 166 minutes the film actually never felt too overly long, though it does take a little bit to get going. The best thing said about the movie is its production values. This is a big budget movie with great effects and set design and makeup. Although not every effect is really all the jaw dropping there is plenty of visual scrumptiousness to feast your eyes on. And Howard Shore returns with a majestic score.

Much has been said about Jackson’s controversial decision to shoot the film at 48 frames per second. While I saw the film in the traditional 24 fps, the new format gives the film an odd motion flow feel akin to what you might see on an HDTV though the detail is supposed to be excellent. Whichever way one sees the film it won’t prevent die hard fans from having a great time and it won’t convert those like me who feel rather indifferent.  GRADE: B-
Posted by Chris at 1:49 PM

Yay! Can't wait to see it. No spoilers, please! =D

Sounds like I'll have a great time, though I hate the motion of HDTV-like format :/ Can't we just go back to VHS? I have no interest in every nook and cranny on a person's face that an entire make-up crew has gone to great lengths to cover up =)

hahaha yeah. you will most likely love it