The Trouble with Scary: “Hitchcock” is Light, Entertaining Behind-the-Scenes Fun 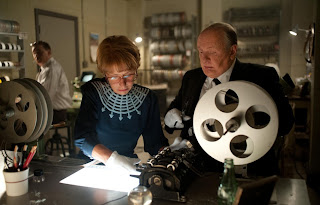 “We all go a little mad sometimes.” That may be true, but I’m not quite sure director Alfred Hitchcock had imaginary conversations with serial killer Ed Gein like he does in “Hitchcock;” a fun and fluffy behind the scenes look at the famous auteur during his days directing his masterpiece “Psycho.” In the film, Anthony Hopkins plays the Master of Suspense behind layers of latex and he’s mostly convincing. It feels more like an imitation rather than a full fledged character as seen in other real-life biopics like “The Queen” and “The King’s Speech” but it doesn’t matter. “Hitchcock” isn’t like those movies at all, nor should it be. It’s not really supposed to be taken too seriously; like the best of Hitch’s work it’s made to directly entertain, rather than inform, its audience. And I think it’s all the better because of that.

“Hitchcock” isn’t trying to be “Gandhi.” And as soon as you realize that you’ll have way more fun. It becomes apparent nearly seconds into the film as Hopkins, as Hitchcock directly addressed the audience, like he used to do so much. The film takes a look at Mr. Hitchcock after his hit “North by Northwest” has been released. He’s looking for a new project and comes across a book by novelist Robert Bloch called “Psycho.” It was a deeply disturbing novel about a young man who murders people while dressed as his deceased mother, whom he had murdered years earlier. Hitch thought it was just dark and twisted enough to become his next film, even though those around him, including his wife Alma (Helen Mirren) sort of thought it wasn’t the right choice. He proceeds anyways, using unconventional low budget methods like hiring the TV crew from “Alfred Hitchcock Presents,” shooting in black and white, and even having to fend off the censors, we get to see how “Psycho” came to be, even if most of these scenes are a bit too brief.

But this isn’t just a behind-the-scenes of the making of Psycho (The script is based on Stephen Rebello’s terrific non-fiction book “Alfred Hitchcock and the Making of Psycho”). It’s also a behind-the-scenes look at Hitch’s relationship with his second shadow: his wife Alma. The woman was a repeatedly uncredited creative force throughout his entire career and the film does a decent job of making sure everyone knows how much influence his wife had on his projects (and how supportive she was). She had worked as an editor and screenwriter and had an uncanny eye for detail. During the editing of Psycho, she was the one who noticed Janet Leigh taking a breath after she was supposed to have been murdered. The movie, like most Hollywood fare, has to set up the conflict in their relationship by suggesting the possibility of Alma being driven to another man (her writer friend Whitfield Cook played by Danny Huston) while her husband becomes obsessed with  making Psycho and flirting with his leading ladies. For every moment like this we wish we could see more of the filming of Psycho, but for anyone who’s a big fan of Hitchcock’s film, the movie is simply a dream come true.

Director Sacha Gervasi, who makes his narrative feature debut here (he previously directed the documentary “Anvil: The Story of Anvil”), keeps things light and frothy with a strong undercurrent of macabre humor, highlighted by Danny Elfman’s  Bernard Herrmann influenced score.  Screenwriter John J. McLaughlin has employed some interesting elements, you might call gimmicks, like having Hitch interact with Ed Gein (Michael Wincott) who influenced the creation of the murderous Norman Bates character. It’s also fun to see actors playing other actors. Scarlet Johansson shows up as Janet Leigh. James D’Arcy is Anthony Perkins. Jessica Biel is Vera Miles, who had a long and sorted history with the director. They all do a great job in their sometimes too brief roles. The great Toni Collette is Peggy Robertson, Hitch’s long time assistant. Even the Karate Kid himself Ralph Macchio shows up in a scene as Psycho screenwriter Joseph Stefano. The film really shines when we get to see the Master of Suspense at work creating his masterpiece; even going as far as to conduct the screams of his audience from out in the lobby during a screening of the movie.

“Hitchcock” is real a treat for fans of Alfred Hitchcock and of anyone who enjoys watching movies about making movies. You’re not always quite sure how accurate it all is; this is a Hollywood movie after all but it does feature fun performances. And even if the film has identity issues because it can’t decide if it’s more interested in showing the behind the scenes of a marriage or of a movie, the whole thing is such a bizarre and fun romp I couldn’t help but enjoy it for all the same reasons why one enjoys a Hitchcock film in the first place: it’s just fun.  GRADE: A-
Posted by Chris at 9:37 PM

This tape is basically an insulation tape which can be used in extreme rolex replica. During the valeting process in watch service, the resistance to friction and temperature hublot replica sale of this tape are found to be immensely useful. The tape is simply cut to shape and added on to the area to be protected during valeting. If spots are used, there is no need to cut just use the spots to tag heuer replica sale to be protected. The tape or spot is also resistant to water, salt water, fungi, bacteria and acids. The replica watches sale is a popular buffing wheel that provides a satin finish. It is ideal for use on all metal types. The fine satin Bufflex wheel is used by replica watches uk as well as watchmakers through out the world. It produces a satin smooth finish that is comparable to a factory finish on replica watches sale cases and bracelets. It is made in France and it has a 100 mm by 25 mm dimension. The centre piece is stitched with leather securely and it has three sections for a thoroughly effective multi surface polishing.

Very helpful advice in this particular post! It’s the little changes that make the largest changes. Thanks for sharing!
Handlessmillionaire.com Snakeis.com balloonsio.org