Holiday Road: Like Jack Frost, “Rise of the Guardians” Left Me Feeling Cold 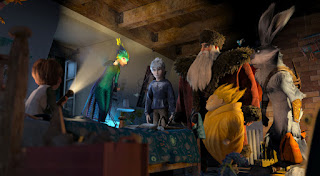 It’s hard to criticize an animated holiday family adventure that means so well like “Rise of the Guardians.” For once, we have a family holiday movie that doesn’t pander to five year-olds by just knocking people in the head or making creepy sexual innuendos that fly over kids’ heads. “Guardians” is a fun take on the holiday mascot mythology that includes Santa Claus, the Easter Bunny, the Tooth Fairy, the Sandman, and even Jack Frost as real beings who sort of work together to protect children all over the world. Sort of a holiday Justice League if you will. But why didn’t this movie quite gel for me? Perhaps it’s best to be a young kid who believes in these guys but, spoiler, Santa ain’t real kiddo.

There’s nothing outwardly wrong with “Rise of the Guardians” but I found a few things to nitpick about. And the first thing is that there’s way too much going on here. What exactly is the story in “Rise of the Guardians?” Is it a Jack Frost original story? Is the story of a young boy named Jamie who still believes in Santa? Is it about the evil Bogeyman who uses children’s fear to make him stronger? Is it about a Russian Santa Claus? Is it about an Australian Easter Bunny? There’s way too much going on here in David Lindsay-Abaire's script and not enough focus.

It’s interesting to have Jack Frost interpreted as a real character, but Chris Pine who provides his voice seems all wrong for what the animators have cooked up. Pine’s deep masculine voice doesn’t fit the skinny, Justin Bieber looking character. I found myself not quite caring about children not being able to see Jack because they don’t “believe” in him. What kid “believes” in Jack Frost in the first place? On the contrary, the Bogeyman character named Pitch Black (voiced by Jude Law) is a perfectly realized Tim Burton inspired character. I wish the film was more about him and less about Santa and the others.

DreamWorks Animation who produced the film has also found a way to capitalize on audience’s strange fascination with Despicable Me’s yellow minion characters by making Santa’s tiny elves loony little mute sidekicks. Santa has tricked them into thinking they make the presents in the North Pole even though he employs a bunch of mute yetis to do that for them. The elves are cute and funny yes, but they’re sense of humor is oddly shoehorned into a rather serious story about evil taking over the world.

“Rise of the Guardians” is far from the worse in animated fare this year. But due to the high standards set by movies like “Wreck-It Ralph” and the stop motion instant classics “Frankenweenie” and “ParaNorman” it’s subpar in comparison. It’s odd to think that both Pixar (with the not quite spectacular “Brave”) and DreamWorks, both pioneers in computer animated entertainment, took a slight backseat this year allowing for other to have a moment to shine. At this point, that Animated Feature Oscar is anybody’s to win.  GRADE: C+
Posted by Chris at 7:51 PM

Your article is very interesting. I think this article has a lot of information needed, looking forward to your new posts. Get permission to share:
run3.me
Basketballlegendsgame.com